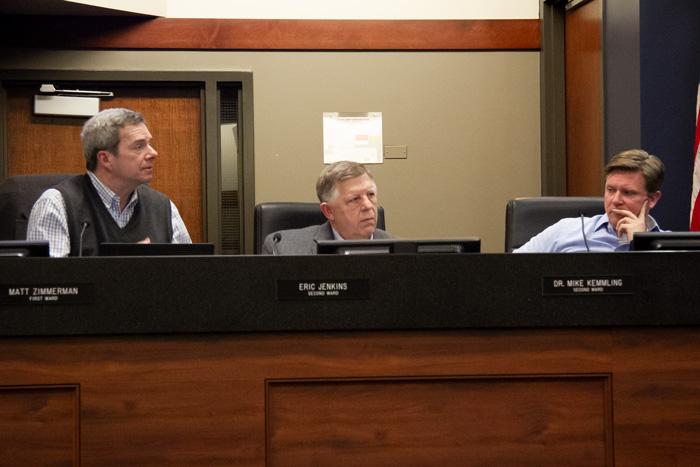 Members of the Shawnee council were split down the middle over who to elect as council president earlier this year.

Little eruptions have been breaking the surface lately, at council and board meetings across the county: an eye roll here, muttered oath there, a veiled suggestion that leaves someone demanding a point of order.

Then the Johnson County Community College trustee board went a step further by deciding to rebuke one of their own with a censure. With that vote came a rare public airing of differences and a glimpse into what can happen when personalities clash hard and no one meets half way.

The JCCC vote followed several tense meetings about the intent of the member in questioning school policies to state legislators. It was an extreme step, and opinions are divided about whether it could have been avoided. But the question remains as to whether other censure votes could become more common, now that JCCC has broken the ice.

Censure is practically unheard of among the county’s various boards and commissions. JCCC’s was a first in its 50-year history. Officials in the larger cities could not remember a time it’s ever happened on their councils. The closest thing was in Prairie Village, where the council voted to oust a member in 2012 because he let a homeless person sleep overnight in City Hall. That eventually was overturned on appeal, but the member lost re-election in 2016.

But times are changing and long-time middle-of-the-road governing bodies have lately begun to develop some edges.

Shawnee, for example, has often been fraught. There have been frequent disagreements on such things as whether the city should build a new community center or give tax breaks to developers. Most recently, council members struggled to resolve a split on who should become council president.

As far back as 2013 the council was embroiled in controversy over the appointment of the mayor’s wife’s uncle to an open seat. The council got a rebuke from the district attorney’s office about open meetings during that brouhaha.

Yet Shawnee has never voted to censure a member. There’s no mention of censure in the city ordinances and no one’s talking about it now, said Julie Breithaupt, city communications manager.

The story’s a little different in Overland Park, where some ideological differences have begun to develop, particularly over development vision for downtown and public assistance for developers.

In fact, the subject of censure has come up recently in that city, as council committee members reviewed the “council member’s creed,” ordinance on ethics. The committee didn’t end up including censure language, though.

Councilmember Paul Lyons said he was thinking of the JCCC action when he asked about adding censure during a committee meeting. “It just so happened at the same time. I wondered what would Overland Park do if we had a similar situation,” Lyons said.

The Overland Park ethics rules that have been in place for decades were up for a review to keep them up to date on gender discrimination, among other things. Mostly they cover conflicts of interest and acceptance of gifts.

Although friction between some council members has become more visible lately, Lyons clarified that his intent was to include some teeth in the ordinance in case there is ever an ethical violation.

“Nothing comes remotely close to that now,” he said.

“I certainly wouldn’t claim that it’s anything of urgency that we need to deal with now. It’s just where we are today. People just seem to be more divisive and more confrontational and it might mean that we need to be more aware of these kinds of things and how we deal with it if something were to happen in our official capacity that people could construe as being unethical,” he said.

Councilmember Faris Farassati, who has been at odds with some others about tax incentives for developers, cited a remark by Councilmember John Thompson during a discussion on a development as deserving of reprimand. As Councilmember Scott Hamblin presented an argument for rescinding an incentive, Thompson asked, “Is your intent as a city council member really trying to do what is best for the city of Overland Park or is your intent to do what is best for yourself?”

Although they have been on opposite sides of some development debates, Farassati and Lyons both see censure as useful as long as it doesn’t become a partisan brickbat.

“I don’t have a problem with the (censure) mechanism,” he said. “It should exist because otherwise it would take away a possibility from the body to dissociate itself from wrongful acts,” he said, using hate speech by a council member as a possible example.

“Bottom line is it cannot be used in a dictatorial way,” he said.

Lyons agreed. “I would not want it to be purely a political kind of deal because one person happens to be from a different viewpoint of the majority of the council,” he said.

With the presidential impeachment arguments in the not-too-distant past as an example, it’s perhaps not surprising that local councils and boards have had public feuds, said Allan Katz, founder and CEO of American Public Square.

“Tribalism and the polarization that was seen at the national level has clearly descended to the local level as well,” he said. “It isn’t always as fraught, and doesn’t manifest itself always the same way, but clearly it’s there.”

American Public Square is a non-profit associated with William Jewell College that hosts a series of conversations aimed at encouraging civil discourse among people of differing opinions.

When disagreements begin to disrupt the formerly smooth surface of elected boards, it can be because new points of view are being heard that were not present before, he said.

“The reason you have local government is someone has to resolve them,” although he added that sometimes they are not resolved to anyone’s satisfaction.

Katz said getting people to sit down in the same room and talk things over has proven the best way to keep clashes from escalating.

“When someone disagrees with you or does something you don’t think is the right way to approach things, we have a tendency to ascribe the worst possible motives,” he said. “When you talk to them in the same room you realize that’s not why they’re doing it. You still may not agree, but it takes away from the demonization that seems to attach itself so easily to people who are on opposite sides of things.”