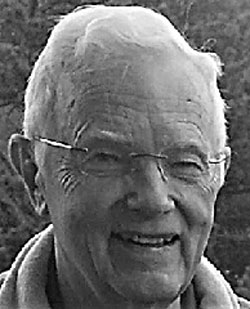 Dr. Richard Allen Morrison, 85, surrounded by his loving children, peacefully joined our Lord and Savior on March 4, 2020. Richard was born to Pansy (Pam) and Rex Morrison on July 25, 1934. He grew up in the Kansas City area and remained a lifelong resident. He attended Shawnee Mission High School and William Jewell College where he graduated with top honors in Chemistry.

Following college, Richard pursued his passion for medicine at the University of Kansas School of Medicine. He sold his prized microscope to purchase an engagement ring for the love of his life, Susan Montgomery, and they were married on June 29, 1958. Richard served as an Air Force Captain and physician at Laredo AFB during the Cuban Missile Crisis. Dr. Morrison dedicated his life to his profession and to his family. He organized and founded the Department of Radiation Oncology at the University of Kansas School of Medicine and became its first chair. He stayed in academic medicine at KU during his family’s formative years to spend time with his family.

After 20 years of academic medicine, he founded and served as the Executive Director of the Radiarium Foundation – a not for profit, independent, regional radiation therapy institute with clinics in Overland Park, KS and Independence, MO to provide patients with exceptional care (allowing for sub-specialization and resource optimization). Dr. Morrison’s ground-breaking research in time-dose relationships led to a modification of the formula which serves as the basis for calculating treatment protocols in the field of radiation oncology. He received numerous awards and accolades over the span of his 50-year medical career. He was recognized by Ingram’s as one of five local physicians of international merit. In addition, to presenting numerous scientific papers at medical conferences, he was a fellow of the American College of Radiology, the American College of Radiation Oncology and the American Society of Therapeutic Radiology. Dr. Morrison invented and patented numerous medical devices and developed new and innovative treatment methods. KU, UMKC, and KCU College of Osteopathic Medicine all recognized him for his outstanding work with oncology residents. In addition, he volunteered to serve on the Richard & Annette Block Second Opinion Clinic and was one of a handful of physicians in the country to be board certified in Internal Medicine, Radiology, and Radiation Oncology. The National Institute of Health and the Department of Defense designated him to oversee radiation relief efforts in the event of a nuclear incident. He also participated in the first successful CPR in Kansas City using a defibrillator while a resident at St. Luke’s Hospital.

Richard Morrison was also active in the community serving as a volunteer leader for the Boy Scouts (Troop 91) leading two expeditions to Philmont Scout Ranch, accompanying scouts to Shiloh Battlefield Trail and supervising numerous canoe trips. Richard was preceded in death by his parents and his wife Susan.

He is survived by his son, David Morrison; daughter, Mary Ann Morrison Stiles (Craig Wahlberg); son, Steven Morrison (Stephanie); and grandchildren: Austin, Maren and Sawyer Stiles and Caroline Morrison. Visitation will be held from 6 p.m. to 8 p.m. on Wednesday, March 11, 2020 at Johnson County Funeral Chapel. A graveside service will be held for family and friends at 1 p.m. on Thursday, March 12, 2020 at Johnson County Memorial Gardens followed by a celebration of Richard’s life at 2:30 p.m. at Village Presbyterian Church. Memorial contributions may be made to Village Presbyterian Church or William Jewell College sent in care of Johnson County Funeral Chapel, 11200 Metcalf Avenue, Overland Park, Kansas 66210. Fond memories and condolences for the family may be left at www.johnsoncountychapel.com.