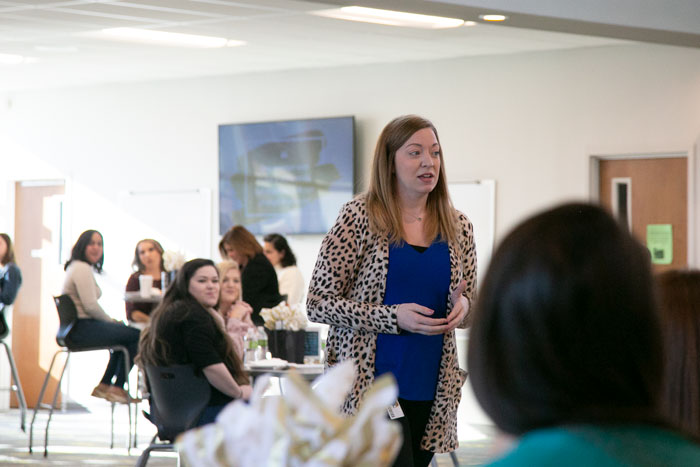 Kelley Capper, an instructional coach at Shawnee Mission West High School, came from a household where a powerful woman — her single mother — made sure Capper and her five sisters knew they could achieve anything they worked at. Now, Capper is working to make sure SM West students have the chance to get that same message from other powerful women.

A group of nearly 40 women leaders on Friday morning met with 53 high school students at the inaugural Women in Leadership Breakfast at SM West. Part of the goal for the event, Capper said, was to provide young women with the skills and the confidence to know they are capable of doing whatever they want to pursue in life.

“I wanted to provide [students] with the opportunity where they could see other women who have paved the way and learn from their insights,” Capper said. “What do you do when someone says you shouldn’t do that, what do you do when you get turned down from your favorite school? I’m hoping every student will remember this for the rest of their life.”

“My hope is that they see that they can achieve anything that they’re capable of, all they have to do is put their heart, their soul, their mind into it and believe in themselves,” Guerrero said.

Students applied to participate in the event. Capper said the 53 students, from all grades, turned into a Women in Leadership cohort: They would meet early on late start days to prepare for the event, watch documentaries and TED Talks, and discuss women in leadership literature. Priority was given to juniors and seniors since Capper intends to make the breakfast an annual event, and underclassmen not chosen this year will have the opportunity to apply next year.

Freshman S’Mya Nichols said she applied to participate because she wanted to hear about other women’s experiences and explore potential career options for after high school. Nichols, who is currently planning to go into medicine, said the event was inspiring and showed her women can be in positions “at the top” such as chief executive officers or vice presidents.

For senior Phoenix Bialek, the event served as a way to see women who are in the male-dominated field of engineering, which she’ll be majoring in after high school. Bialek said the event gave her a boost of confidence going into her future after she spoke with women from a variety of fields. As a student who is already involved at SM West and holds various leadership positions, Bialek said she hopes the event continues as a way to help turn other young women into leaders.

“I know that young females, there are a lot of them looking to make a change,” Bialek said. “There are a lot of girls who may need a little bit of help having that encouragement to step up and be a great leader. This is a great opportunity to help them get out of their bubbles and gain some confidence.”