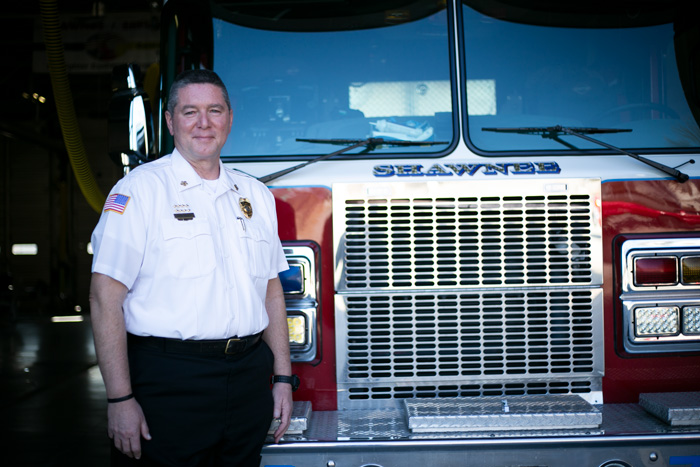 Shawnee Fire Chief John Mattox is planning to retire after 40 years in fire safety — 19 of those years with the Shawnee Fire Department.

After 40 years in fire safety service and investigations, Chief John Mattox is retiring from the Shawnee Fire Department.

Mattox announced his retirement to staff in fall 2019, and Mayor Michelle Distler honored the chief and his service to Shawnee during her State of the City address last month.

His last day is June 15, and his official retirement date is July 1.

“I’m very appreciative, thankful for the support from the community, the firefighters,” Mattox said. “If you surround yourself with the right people, they will make you successful, and I think I’ve done that.”

The city is in the process of identifying a new fire chief to take over after Mattox retires.

He served in Shawnee during the past 19 years of his career, starting as fire marshal in 2001, handling investigations and prevention. Later on, he was promoted to deputy fire chief and then in 2011, he began serving as fire chief.

During his time in Shawnee, he oversaw growth of the fire department, including adding new crewmembers to headquarters on Quivira Road, the addition of a fourth fire station (located in the northwestern part of the city), and promoting all 15 captains and all three battalion chiefs as well as the deputy chief and fire marshal.

“That’s the only reason I think I’ve been successful, is because of all them,” he added.

The ‘amazing’ evolution of technology in fire safety

Prior to his career in Shawnee, he worked in Edwardsville, where he started as a volunteer firefighter in 1979. He was hired full-time there in 1983 and rose in the ranks to assistant fire chief.

“The guys joke, did you have to feed the horses back then?” he joked. “No — not that old.”

However, Mattox has witnessed several significant changes in firefighting and protections for personnel. When he first started his career, he was often the only person there at the Edwardsville station. Emergency calls were dialed to a 7-digit number — 911 was not a thing back then — and he would page his fellow firefighters at home through a system called Plectron, telling them to meet him at the scene.

Mattox said the evolution of technology, especially for firefighters’ safety, has been “amazing.” These changes have come out of necessity, because fire safety work is dangerous and risky.

“I don’t think we knew any better — we being a society — of the hazards of smoke and what all was in it,” Mattox added. “It’s just the way it was.”

Firefighters have better equipment and protocol that keep them safer. They used to wear large coats, and water would drip into their mid-thigh boots while they worked a fire. Rubber gloves would melt on their hands too. Now, all outfits are custom-fitted for each firefighter. And the full bunker gear (airpacks included) is no longer an option.

Sirens are now in the bumper instead of on the roofs of vehicles so it no longer affects the firefighers’ hearing. They don’t ride outside of their vehicles like they used to, and they wear seatbelts.

“I think if you asked a firefighter today to ride on the back of a truck, they would look at you like you were crazy,” Mattox added.

With the introduction of 911 and increased funding for public safety resources, Mattox has also seen response times improve, but house fires are also burning more quickly. He said this is because homes are more often made from synthetic materials, which burn more quickly than traditional building materials like wood.

Mattox said he still believes that his department has “the best firefighters in the world.”

“I think we have been so successful because of the support from both the community and our elected officials,” he said. “The chiefs before me set that stage, Chief Buck Hartley and Chief Jeff Hudson, it wasn’t anything that I did. I had a great foundation to work with.”

After retirement, Mattox said he’s planning to go on an Alaskan cruise with friends and his wife of 38 years, Tracy Mattox. The couple is planning to stay in Shawnee.