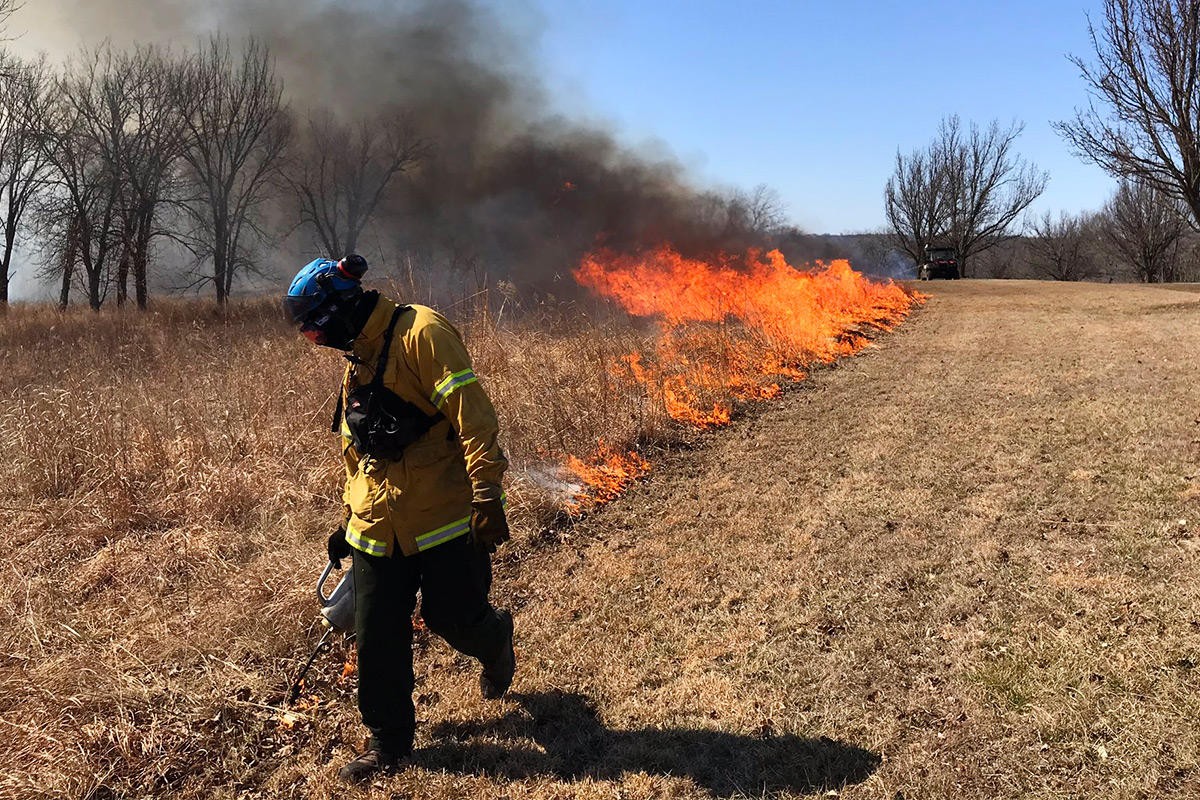 SHAWNEE, Kansas — Field biologist Matt Garrett kept a close eye on the smoke rising from a patch of prairie that burned during a controlled fire. He stayed in constant communication with his team.

“The sun is going to hit this and warm the soil and you’re going to see these native prairie plants emerging really soon out of this charred landscape,” Garrett said, describing the burn the day after.

It’s a routine to strengthen the health of a prairie that happens every spring all across Kansas’ Flint Hills. But Garrett wasn’t in the Flint Hills. He burned part of Shawnee Mission Park in Johnson County, less than a mile from homes and businesses.

Johnson County Park and Recreation District is in the first year of a 10-year, $6.5 million natural resources plan aimed at restoring and managing 8,700 acres. The county isn’t alone: There are efforts across the state, both from nonprofits and government agencies, to preserve and restore the nation’s last tallgrass prairie ecosystem.

But Johnson County isn’t a place you’d associate with natural prairie: It’s one of the fastest-growing counties in the state, and the most populous.

The Johnson County Parks and Recreation District is responsible for about 10,000 acres. Only about 1,000  is considered recreation space — places with playgrounds, pavilions, or boat docks. The rest are natural areas, which, until last year, received less than 1% of the agency’s budget for maintenance.

In 2019, it passed a 10-year plan which included millions to preserve and restore native habitat.

“Long-term, the goal is to be managing our woodlands and prairies for less than it costs to mow turf grass,” Garrett said.

But getting there will take a lot of work. Restoring natural prairies involves spraying herbicide to kill invasive plants, physically removing trees, such as eastern red cedar, and spreading large amounts of native seed.

The burning field Garrett was working on is only three years into that process.

“It took it a solid two years for it to not be just weeds,” he said. “They don’t show much the first few years, they’re building root systems.”

In some ways, Kansas is better than other states when it comes to preserving native prairie; it’s home to two-thirds of the country’s remaining natural tallgrass prairie.

That’s due in part to the rocky nature of the Flint Hills, which was used for cattle grazing instead of farmland.

“There’s no place else in North America where you can see uninterrupted expanses of tallgrass prairie,” said Brian Obermeyer, director of protection and stewardship for the Nature Conservancy.

Tallgrass prairie has lost more acres to development than any other ecosystem in the country, he said. And his nonprofit is trying to make sure that number doesn’t get any bigger.

The key to fighting encroachment from development and trees, he said, is making sure the cattle industry in the area remains viable and that landowners continue to manage the land with fire.

Private landowners who want to restore prairie have a few options. Farmers with less productive land near rivers and streams can take advantage of U.S. Department of Agriculture programs that compensate landowners for restoring it back to grassland. Otherwise, Obermeyer said, it takes a group of people who are willing to sacrifice their own time and money.

“It can be labor intensive and it can be expensive,” said Sara Baer, director of the Kansas Biological Survey. “Some of the most successful prairie restoration efforts have been successful through a lot of volunteer work.”

Johnson County has a professional staff and hired contractors working on the restoration, but Garrett said local groups such as KC Wildlands, as well as  mountain bikers, have played key roles.

Baer said having a project like this near urban centers can inspire preservation beyond the immediate area.

Since prairies are a part of Kansas’ cultural heritage, supporters believe that exposing people to something they’d otherwise have to travel to see helps people understand how important natural prairies can be.

“I wouldn’t underestimate the educational value that goes along with it,” she said. “It’s going to be a short field trip for a lot of kids in Johnson County.”