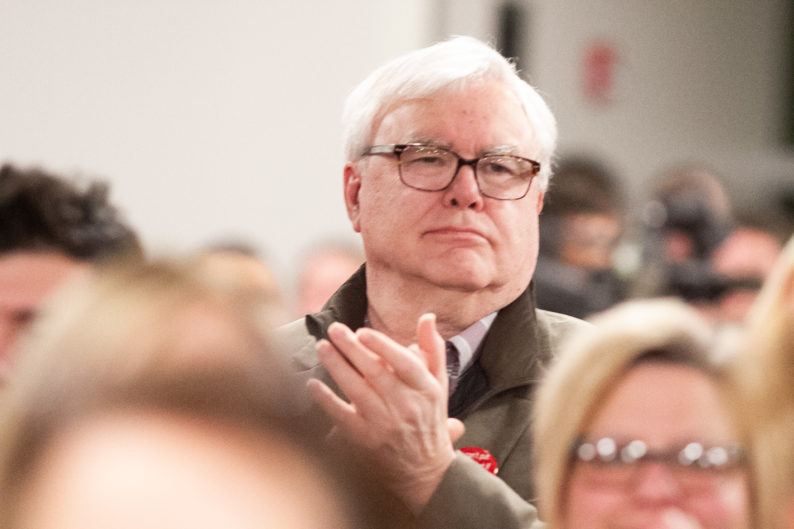 Rep. Jerry Stogsdill says the prospects for Medicaid expansion passing this session appear to have diminished.

Each legislative session, we provide Shawnee Mission area legislators the opportunity to share their thoughts about what’s happening in the state capitol. Rep. Jerry Stogsdill, Rep. Susan Ruiz and Sen. Jim Denning are scheduled to send updates this week. Rep. Stogsdill’s column is below.

Now, for the not so good news: Unfortunately, there are still too many ultra-conservative legislators in the Kansas House and Senate who have little regard for public education. These are the Brownback leftovers who make up the top leadership in the Kansas House and Senate and who appoint the most anti-public school legislators to head the committees that deal with education funding and policy. Until these people are voted out of office, hopefully this November, our public schools, colleges and universities will be subject to the same attacks they faced during the disastrous Brownback administration. The quality of our public schools, colleges and universities represents the number one economic development issue in Kansas and until we get Legislative leadership and a majority of members who understand this reality, the future of our children and our economy will be at risk.

Now, the REALLY not so good news! I wish I had better news to report on the long overdue expansion of Medicaid in Kansas but, unfortunately, three Kansas Senators, Senate President Susan Wagle, Senate Health Committee Chairman Gene Suellentrop and the ironically named “Truth Caucus” leader Senator Ty Masterson are standing in the way of the Legislature passing Medicaid expansion

Not passing Medicaid expansion has cost Kansas BILLIONS in federal tax funds NOT being returned to Kansas to provide affordable, available and adequate health care for 150,000 working Kansas families and their children. Passing Medicaid expansion will also help to save some of our most financially vulnerable hospitals, will generate hundreds of new health care jobs and will add a major financial stimulus to the Kansas economy.

The major health care organizations in Kansas have committed $35 million to help Kansas cover the difference between the federal contribution and the state’s responsibilities. The health organizations realize the tremendous value in expanding Medicaid and are willing to put up their own dollars to help.

During this time of healthcare uncertainly, due to the outbreak of the coronavirus, it is more important than ever that we expand Medicaid. If we don’t expand Medicaid it potentially leaves 150,000 Kansans without the health care availability and in many cases the financial resources to identify if they might have the virus or to have the virus treated if discovered. This situation not only puts the health and well-being of these uninsured families at risk but potentially puts the health and well-being of all Kansans at risk.

Unfortunately, Senate leadership seems to be more interested in obstructing Medicaid expansion for their own political ambitions rather than expanding Medicaid for the good of the people of Kansas. That is simply irresponsible, heartless and unacceptable. If you agree you might want to contact them. Their contact information can be found at kslegislature.org under the “Legislators” tab at the top of the page.

Now, some more potentially good news! There are still a whole number of major issues the Legislature will have to deal with over the next several weeks that could have a very positive impact on Kansans. A few of these issues include the legalization of sports betting, the legalization of medical cannabis, gun violence reduction legislation, issues of access and accuracy in our upcoming fall elections, taxation issues, environmental issues, issues concerning rural revitalization and the allocation of funds and approval of the state budget.

Unfortunately, leadership in the House and Senate have, so far, been reluctant to address any of these issues in any significant way and will probably, as usual, try to jam them all in at the very end of the session. By doing this they hope some issues will die due to the lack of time to deal with them or that they can jam issues together, under the guise of expediency, and sneak some very bad legislation into combination bills that include some very good legislation.

Waiting until the very end of the session to address these important issues is NOT the way the process is supposed to work. It shows that the “leaders” in the House and Senate are more concerned with ultra-conservative politics and their own personal political ambitions than taking the time to fully study, debate and vote on these issues which are of critical interest to every Kansan. Many of us will be working hard on ways to get these issues up for discussion and votes as soon as possible.

Hopefully, in my next report I will have more and better news to report from Topeka. I will be holding a community forum in early April to bring people up to date. I will have more information out shortly concerning the time and location of that forum.

As always, I consider it a privilege, an honor and a great responsibility to represent the best interests of the people of the 21st House District. If anyone has a question or suggestion for me please don’t hesitate to get in touch. My contact information, both at home and in Topeka, is readily available at kslegislature.org under the “Legislators” tab at the top of the page.