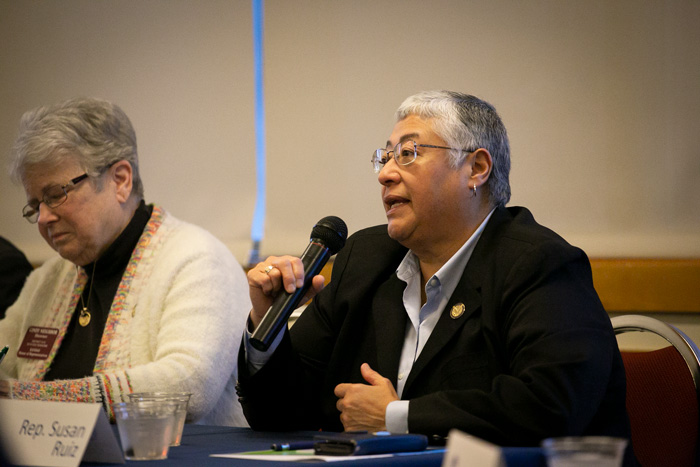 Rep. Susan Ruiz says she's been surprised by the level of obstructionism she sees in the statehouse.

Each legislative session, we provide Shawnee Mission area legislators the opportunity to share their thoughts about what’s happening in the state capitol. Rep. Jerry Stogsdill, Rep. Susan Ruiz and Sen. Jim Denning are scheduled to send updates this week. Rep. Ruiz’s column is below.

The question most often asked of me is, “As a freshman, what has surprised you the most about being in the legislature?” Most of the time my response has been to say I am most surprised by the level of obstructionism used by the majority leadership. The definition of obstructionism is the practice of deliberately impeding or delaying the course of legal, legislative, or other procedures. This is so frustrating for me and most of my colleagues. Legislation is not being just slowed, it has been stopped almost entirely. I drive to Topeka on a daily basis just to find out that we “gavel in and gavel out” within about an hour. The committees I’m on haven’t met in a couple of weeks. We aren’t passing any bills that are of any substance. I’m mindful of the tax dollars wasted by having the representatives sit at our desks on the floor and do nothing.

There’s been lots of media coverage about the Senate President pushing aside bills already passed in the house that could be used to pass Medicaid expansion. The House majority leadership seem to be in lock step with the Senate President in ensuring no legislation passes or even moves forward. I truly believe the majority of the House members and committee chairs want to pass meaningful bills that would improve the lives of Kansans. However, many seem caught in the darkness of obstructionism. So, there is really no update to give to my constituents or the citizens of Johnson County.

This legislative session is more than halfway over and we can point to few or no accomplishments. I ask everyone to contact the Senate/House Majority Leadership and also cc their representative and senator. Ask the majority leadership to stop the obstructionism and bring the Medicaid expansion bill to a vote, and to let us have hearings on all of the other bills already brought forward.

If you want to talk with me about this or other issues, I can be reached by email at susan.ruiz@house.ks.gov or you can call me at (785) 296-7482. It is an honor and a pleasure to serve you. Always.