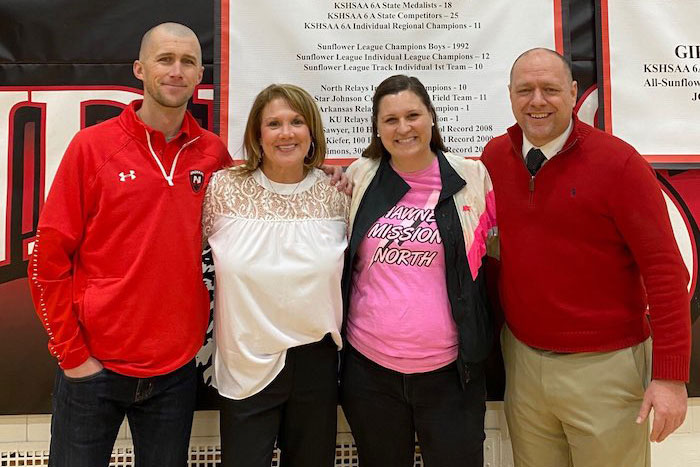 Kaye Frisbie began her 27-year career as a Shawnee Mission North physical education teacher and coach in 1987. She coached basketball, volleyball and cross country, but in her last years of teaching, she focused on one sport: track.

Last month, SM North inducted Frisbie into the school’s Hall of Fame alongside two athletes, Karen (Keitzman) Martin and Michelle (Hubler) Wingerd. Frisbie said being inducted into the Hall of Fame was an incredible honor, and although she was the recipient, she gives much of the credit to her student athletes.

“I really feel like my Hall of Fame [induction] was a reflection on my athletes, you know,” Frisbie said. “I really feel like they shared in that, because I was very, very fortunate to have some phenomenal athletes that had a lot of success at the ultimate level — which at high school, would be at your state level.”

The most rewarding part of being a coach, she said, is teaching athletes life lessons. Those same rewarding moments can also be challenges. Frisbie said she had to work hard “to get serious about things” with the first student she coached that went on to become a state champion.

Frisbie said she stuck with him: He started to see some success during his junior year and he ended his senior year as a state champion. Years later, he wrote Frisbie a letter stating he appreciated her commitment — and that he knew he was a handful when he was younger, she said.

Aaron Davidson, a physical education teacher and the cross country and track coach at SM North, worked alongside Frisbie for seven years. Frisbie was a good mentor to Davidson and he learned a lot from her, he said. The level of professionalism she brought to coaching day in and day out served as a blueprint on how to be a successful coach, Davidson said.

“When you put that much time and effort into one school and one comunity, you have such an impact that an honor like [a Hall of Fame induction] is meant for people like her,” Davidson said. “She was the perfect candidate and perfect to receive that honor.”

After 27 years at SM North, Frisbie said it was a great place to be for most of her teaching career. From the loyalty she felt toward the school to the diverse student population, Frisbie said she feels blessed to have been able to share in the amount of pride and tradition at the district’s first high school.