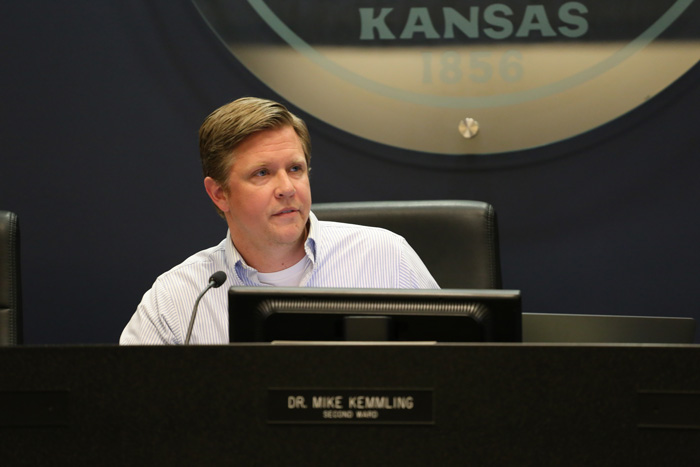 After nearly three hours of deliberations Tuesday, the Shawnee city council has come up with a plan for self-electing its president.

After comparing pros and cons of the policies and ordinances governing committees and council presidents of neighboring cities, the Shawnee city council also ultimately agreed to make some changes to its internal election process of the council president.

The new process favored by most of the city council is a runoff election. With that process, councilmembers who are nominated for council president would be put on a single ballot; if one nominee wins a simple majority (5 votes), then s/he wins the role. If not, then the nominee with the fewest votes is removed from the list, and the voting process begins again. until there are two candidates left. This continues until there is either a simple majority or a tie. The city council agreed to break a tie with a coin toss.

The current election process allows councilmembers to self-nominate, or nominate one of their own, to be council president. All nominations end up on a single ballot, and councilmembers select one person.

However, with that process in place, the Shawnee council ran into a deadlock with electing a new president in January because each of three nominated councilmembers had gained only four votes from his/her colleagues. There was no system in place to address 4-4 splits on nominations.

Mayor Michelle Distler declined to break the 4-4 tie each time a councilmember was nominated, and she indicated that she has no plans to change her mind in the future.

“As a matter of principle, I will not vote for or against any of my councilmembers as that causes strife and division,” Distler said in an interview.

“I think that part of the impasse that we’ve been having lately with this council president is because of the input on the agenda and the line of succession,” said Councilmember Mike Kemmling, who is serving as council president for the time being because of his seniority on the council. “I think if we take that away from the council president, now it’s not that coveted spot anymore, and it’s not going to maybe have quite the animosity or the fighting, if this is really just someone who is going to chair in the absence of the mayor. It takes some of the shine off of it.”

Some councilmembers said they think tenure as an elected official should hold more weight when considering the council president, and that in the event of a tie, then the senior councilmember should be considered for the role first. However, no motions or suggestions relating to seniority gained enough traction.

The council also agreed to permanently cancel the last meeting of the year, citing conflicts with Christmas, a major holiday.

Furthermore, Distler said she always listens to the audio livestream of council committee meetings, but the mayor never attends because she thought she was prohibited from attending.

“I was told when I became mayor that I was not allowed in the room let alone up on the dais,” Distler said. “It’s not that I didn’t choose to be there. I was told not to be there.”

The recommendations from the city council committee meeting may require changes to Charter Ordinance 45, Policy Statement 7 or the city’s regular ordinances. Charter ordinances take about 80 days and notice must be published before going into effect, while policy revisions become effective immediately upon approval.

Here are the seven decisions made by the city council during the committee meeting, as well as vote count and the impact to the ordinances and policies governing city affairs: