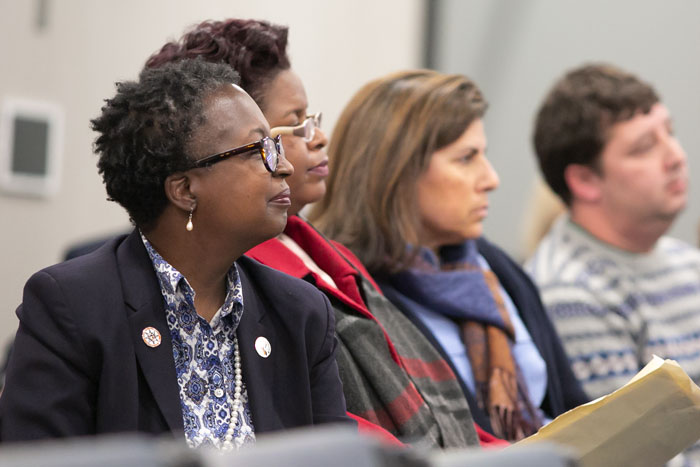 A group of SMSD parents have been working on diversity efforts for five years. Three of their recommendations to the district have been implemented — but they're hoping for more movement on increasing the number of minority teachers in the classroom.

While teachers and parents alike recognize the district’s efforts and challenges, they say more can be done to have its teacher population reflect and understand its student population.The district says it’s not for lack of trying: It’s competing with other districts for a small number of minority candidates.

A LOOK AT THE DATA

At Indian Woods, Shawnee Mission North and now SM West, Carter has been the only or one of two black teachers. She said the data shows that the district has not done a satisfactory job addressing the growing diversity of the Shawnee Mission student population.

Over 96% of SMSD’s teachers are white, according to 2019-20 self-reported data. The district employs over 2,000 teachers, meaning around 80 are minorities. Nearly 40% of students are minorities, with roughly 20% being Latino or Hispanic and 10% being black.

Minority students at the district’s most diverse high schools, SM North and SM West, account for 44% and 47% of students, according to the Kansas State Department of Education. Jackie Madrigal, an English language learners teacher at SM North, said the ratio of minority teachers to minority students is a glaring problem.

“That’s not like ‘my toe is broken,’ that’s like ‘my leg is about to fall off,’” Madrigal said. “If your student population is changing and you don’t have adults in front of them who really understand them, then it breeds so many problems — discipline problems, graduation rate problems — because of a lot of misunderstandings.”

A lack of representation can mean more pressure on the district’s few minority teachers. Madrigal developed an entire class to offer Latino students a way to see themselves in the curriculum.

She started working on her U.S. Latino literature elective in 2011, and it became a reality by 2015. But the first time she proposed the course, it failed, partially due to a lack of understanding, she said.

Not only do black and Latino students seek Carter out for advice, so do Spanish-speaking parents and mixed-status families. At times, Carter said being the voice for a group of people feels like a burden.

The two teachers share experiences beyond the pressure of being a role model to a growing population of minority students. A lack of cultural understanding has led Madrigal to feel like she operates in isolation, she said. For Carter, feelings of isolation stem from not being able to share experiences with her colleagues.

“It’s difficult and it’s isolating,” Carter said. “Although I love my colleagues deeply, it is very frustrating to see that they don’t go through the same things that I go through at times because they’re not a person of color.”

The district’s five-year strategic plan outlines a strategy focused on creating an equitable, inclusive culture. One action plan from that strategy focuses on hiring and recruiting minorities.

“We would prefer that our teaching staff and administration staff kind of mirror [the student population] so that our students see people who look like themselves in the front of classrooms,” Schumacher said. “We see the need and we’re making the effort.”

Schumacher said the district recruits from local universities, and there aren’t many minority candidates in those education departments. Below are some action steps outlined in the strategic plan — each with a due date of fourth quarter 2020-21 or earlier — intended to address this:

Schumacher said the district is working to develop affinity groups  in an effort to make it more comfortable and conducive for minority teachers to work at SMSD. The district does not yet have a plan to measure the success of its strategy, but Schumacher said the goal is to hire more people of color.

After five years of working on diversity, a group of SMSD parents presented 13 recommendations to the Board of Education, three of which have been implemented.

One of the recommendations was to recruit and retain “diverse and culturally competent administrators, faculty and staff.” SM West parent Anisha Jackson said student performance is improved when they see adults who look like them in leadership roles.

“When you see someone of color in a leadership role, that sets the bar, that changes the narrative and the conversation,” Jackson said.

If the district implemented each recommendation, former SM East parent Bernie Winston said, it would see a culture shift and significant academic improvement. Additionally, Winston said the district would support and retain its current minority teachers if it wants to make diversity a priority.

On a similar note, former SM East parent Debbie Williams said that while the district is successful in many ways, there’s room for improvement. She said diverse leaders will prepare students for the real world.

“If you want these kids to be as excellent as you say you do, you have to send them out here prepared to know everywhere is not Prairie Village — and not everyone is going to take some of the stuff your fellow students say,” Williams said.