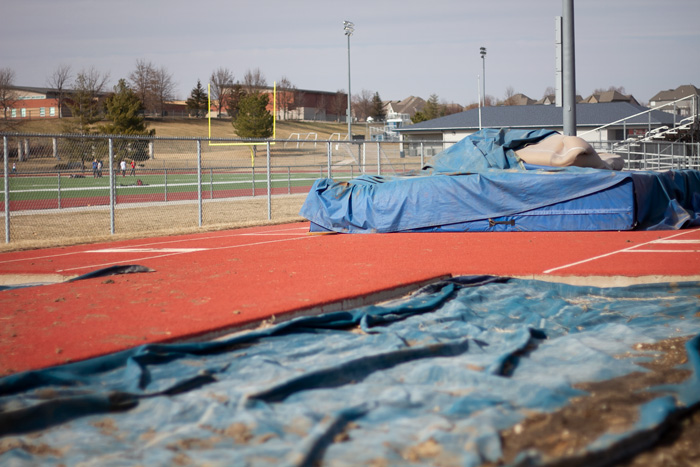 Some renovations are already underway at the Mill Valley High stadium.

Athletics facilities at both Mill Valley and De Soto high schools will be renovated in the coming months, and district staff gave the school board a status update on the projects last month.

The renovations are part of a series of projects funded from an $85 million bond issue approved by voters in May 2018. Here’s where the two projects stand:

The stadium at Mill Valley High will undergo some renovations that the district expects to complete in summer 2020. These include additional bleacher seating and storage, as well as a new press box, track resurfacing and installing artificial turf at the soccer field. Leading the project design is HTK Architects. Total cost is $3.4 million.

Scott Hazelitt with the design consultant HTK Architects said on Feb. 3 that one issue remains with the Mill Valley stadium light poles: Once the additional bleachers are installed on the home side, the light poles will partially block view of the field for those seated behind them.

District staff and architects are looking into an alternative that would move the light poles outside of the seating area, which means the lights must be higher and brighter. Alvie Cater, district spokesperson, said the design team is planning to complete a light study and find ways to utilize LED technology and control light spillage outside of the stadium.

The project will be bid with both options for the light poles, and neither of these plans are expected to delay the project, Cater added.

Concerning the new press box, Hazelitt said they will bid the project with multiple proposals for construction materials, one of which includes the use of shipping containers. Shipping containers instead of more traditional materials could result in about $350,000 in cost savings, according to an estimate from HTK Architects.

The Shawnee planning commission will review final plans for Mill Valley High in March, after which the project will go out for bid.

The stadium at De Soto High is also slated for renovations this year; upgrades are part of the district’s master site plan that the school board approved in November. Improvements this year include additional bleacher seating and parking, building new locker rooms and concession areas, and installing artificial turf for the soccer field.

Some reconfiguration of the site has delayed the start date for most of the project from this summer to November.

Steve Deghand, director of facilities, said the new plans call for relocating the new locker room area from a stand-alone building on the site to a location underneath the bleachers. The new location places the locker rooms between the football and soccer fields.

The design changes prevent upgrades from being completed simultaneously for the soccer field turf and the locker room area, Deghand said, because it would impact practices and games during the soccer and football season.

“Bottom line is, we can’t do all of that in a three-month span, starting after Memorial Day and finishing by August,” Deghand said.

Completion is now expected to be in August 2021.

De Soto High will also have additional parking near the athletics facilities and an access road to the new parking area from 87th Street. That part of the project $1.6 million will begin this summer. The rest of the project is in the design phase, so costs are not finalized, Cater noted.