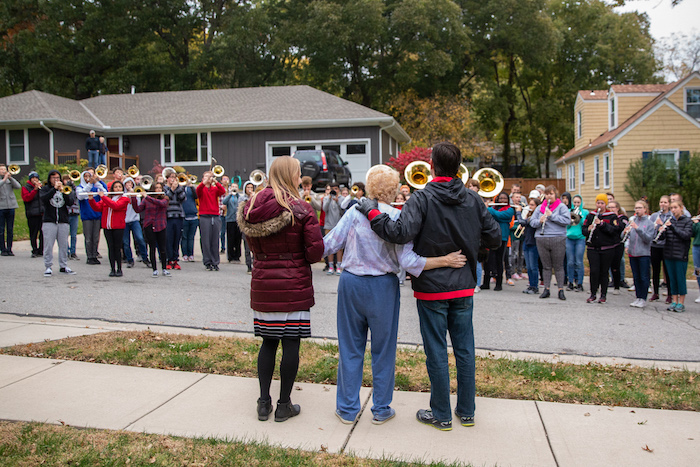 After Blanche Williams heard the Shawnee Mission North band perform at Homecoming, she wrote a letter suggesting they perform again on her 85th birthday. To her surprise, 93 band students showed up at her house on Oct. 28 to play her a rendition of “Happy Birthday.”For this specific act of kindness along with others, the SM North Band Director Chad Reed, Associate Band Director Rebecca Fillingham and the band itself were named the 2019 recipients of the Kansas State High School Activities Association’s Heart of the Arts award. Reed — who has been the band director at SM North for 21 years — said while the band was shocked to receive this award, it’s representative of his students.

“I think it’s a reflection on our kids and what kind hearts they have,” Reed said.

The KSHSAA Heart of the Arts Award can honor an individual or a team, and it “recognizes the values inherent to participation in high school performing arts programs that go above and beyond the norm,” according to KSHSAA. The SM North marching band is the first recipient that is not an individual since 2013, according to the full list of recipients.

While the surprise performance set the SM North marching band over the top, it wasn’t the only factor. Reed said the band will perform at various community centers and at nursing homes when asked. Additionally, some of the high schoolers will teach and mentor the middle and elementary level band students.

KSHSAA Executive Director Bill Faflick said in an email to the Shawnee Mission Post Reed and the SM North band “were an obvious selection” for the award. By playing “Happy Birthday” for Williams, the band demonstrated a commitment to the community, he said.

“The lesson learned by the students in the band, as well as those who heard of the act, is the realization you can make a difference and bring a smile to others by thoughtfully planning and executive a kind act as simple as playing happy birthday on their special day,” Faflick said.

Reed said the performance for Williams worked out perfectly: The marching season came to an end the night before her birthday. Although the SM North band program has around 150 members, the performance took place during the school day and some were in other classes, Reed said.

“There’s so many news stories that point to things that are bad in the world, that it was fun to highlight our kids — and what wonderful kids they are,” Reed said.