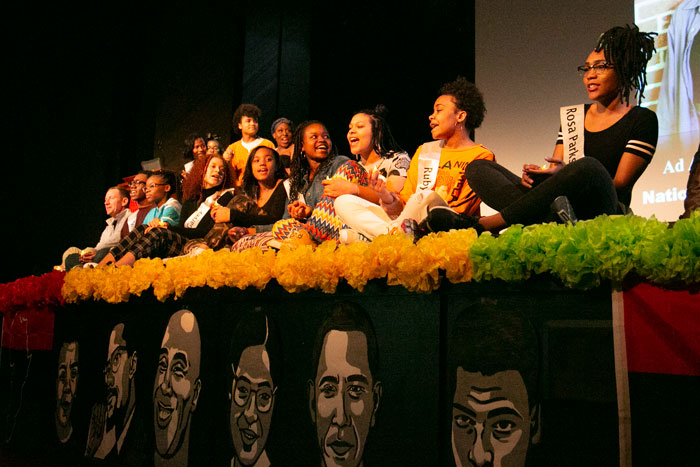 Students sing along for the Black History Month program finale: Michael Jackson's 'We are the World.'

The school’s annual Black History Month program featured a number of students, alumni, teachers and guests who celebrated black culture and touched on important issues in the black community. Senior Mystika Allison-Barnes performed a spoken word that argued for  the importance of celebrating blackness for more than 28 days out of the year.

“We’ve become complacent believing that one month is good enough,” Allison-Barnes said. “One month is all we need to celebrate greatness, to recognize those whose sacrifices led to the freedoms we take for granted today, to recognize the progress we’ve made, to take pride in ourselves — it’s not enough.”

Allison-Barnes also mentioned the lack of people of color represented in school curriculum, specifically in history. This leads to hearing the same names and same stories about black activists during Black History Month, she said, such as Martin Luther King Jr. and his dream or Rosa Parks and the bus. Allison-Barnes said people should focus more on the future of black people because by neglecting the future, “we are neglecting the purpose of Black History Month altogether.”

SM North student OreOluwa Oni gave a speech regarding identity. Oni said American children of African immigrant parents — like herself — face tough decisions every day about how to make their way through the community.

Oni said many people differentiate between Africans and African Americans in the United States: Africans are often seen as more hard working and educationally driven compared to their African-American counterparts she said. By labeling someone as African versus African-American, it is contributing to the stereotypes, she said.

“I don’t speak for everybody, but we don’t need or want [the definitions], because definitions belong to the definers, not the defined,” Oni said. “And people are too complicated to have such labels.”

Other performances included senior Nadia Battle singing Billie Holiday’s “Strange Fruit” and reciting the original poem, “Me and You,” an African drum performance, a song solo of “Casket Pretty” by Kai Bynum and a bass solo of “Amazing Grace” by Amil McDaniel. The Raytown High School step team performed a step routine, and members of the team said step originated from South Africa, and was known as the “dumbo dance.”

“We often cannot see or hear or understand the meaning of behaviors beyond our own experience,” Bates said. “Don’t allow something you don’t understand to keep you from understanding.”