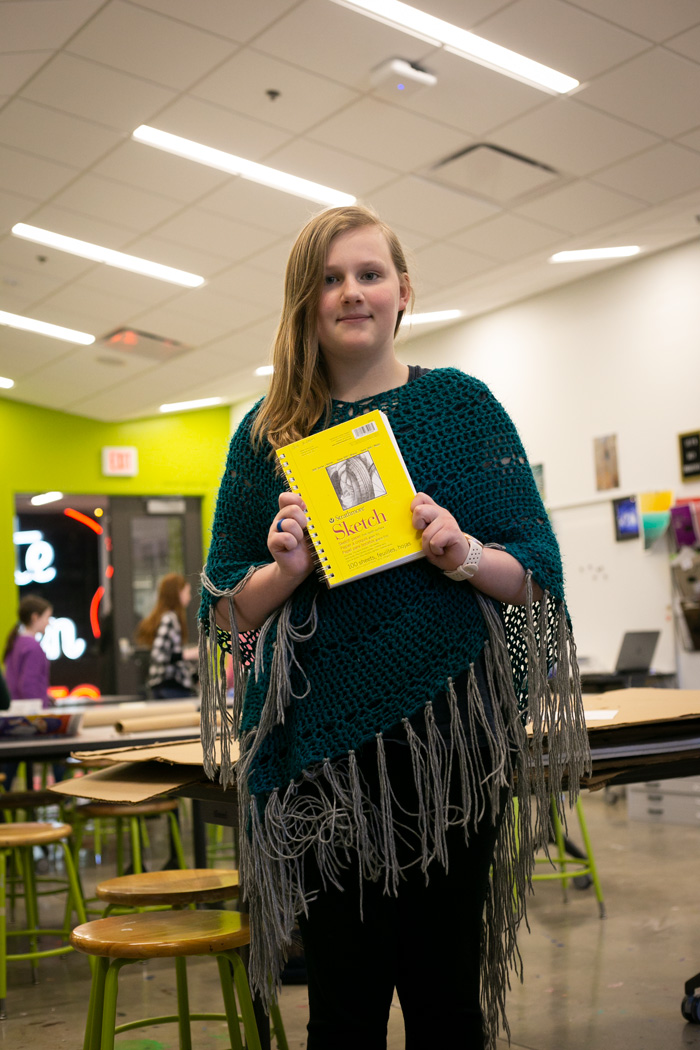 At 12 years old, Claire Henderson has already spent nearly half of her life on stage. An avid fan of public speaking, she’s planning to follow in her father’s footsteps. Devin Henderson is a motivational speaker who goes on tours, and Claire doesn’t just tag along; she participates in her own public speaking sessions. She also enjoys “artsy things” like painting, drawing and writing. She’s thinking about law school someday, just like her aunt. In the meantime, she’s also started babysitting. The oldest of six sisters, she lives in Shawnee with her parents, Devin and Lynn Henderson, and sisters Charlotte, Cambry, Elsie, Eva and Emme.

I like stage stuff. My dad’s a speaker, like a comedian, a motivational speaker. I go to my dad’s shows a lot. He’s just come back from a few trips.

Sometimes I open for him. That’s a lot of fun. Sometimes, me and Charlotte and Cambry, we used to go up and tell jokes when we were really little. It was adorable. We got all courtesy laughs.

The conference that I go to, it’s a lot of fun. People from all over the world come. I’ve met people from Germany and England that are my age. That was fun, and I asked the German dude to teach me German, and he’s like it’s not easy. So now I’m trying to learn German on my own.

I met a really good friend, the one from England. She’s a really good author and I asked if I could illustrate for her books, and she’s like oh my gosh yes. So I got her address and we were just writing each other.

I also started writing a little comedy bit and that was fun. I kind of go on and off with all my schoolwork. In the summer, I want to work on it more. I just really like performing, I do kind of like acting even though I’m not good at it at all. But I like being on stage because it’s comfortable for me, honestly.

I did a talent show and that was fun. I did what’s called juggling sticks or devil sticks. You get three sticks about the same length, it’s like a baton and you hit it back and forth and do cool tricks. It’s fun. I just learned one day at a fair here, Old Shawnee Days. My dad does shows there.

My dad, he’s really supportive, whatever I want to do, unless it’s not something that I should do. And whenever I’m writing something to say or memorizing something, he helps me. He’s just a great guy.

Being on stage can be very, very, VERY nerve-wracking, but it’s really easy once you get on stage and start. Like even I’m really nervous and I’ve gone on stage quite a few times.

I think I asked my dad that one time, and he’s like no not really anymore, but it did happen a lot when I was younger, a few years ago, before I really started. Now he’s fine.

Every single time I’ve been on stage, it honestly looks a lot different. So if you’re just looking at the stage, it just looks like oh there’s a stage and there’s a person on it.

But when you’re on the stage, it’s completely different because everything is lighter, and you’re looking at all these people instead of just seeing the back of people’s heads or just the stage.

It’s so crazy how different it is. It doesn’t even look like the same room anymore. I don’t know if anyone can vouch for that but that’s me.