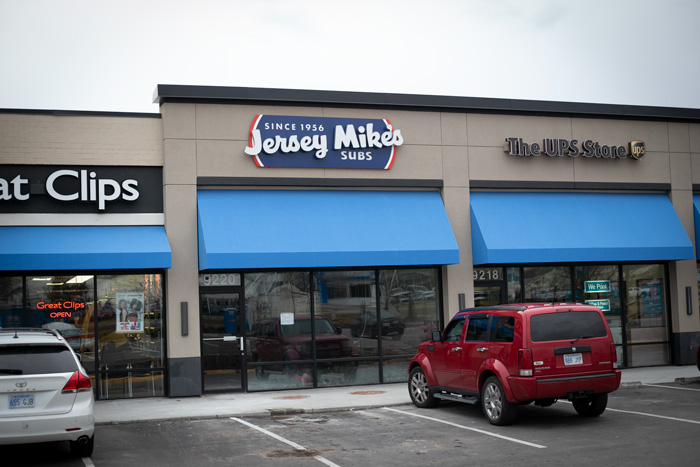 Jersey Mike's Subs is slated to open in April at 9220 Metcalf Ave., Overland Park. It's the former site of Geo's Pizzeria, which closed in November 2018.

A franchisee of Jersey Mike’s Subs is planning to open a new location in the Regency Park Shopping Center, near 91st and Metcalf in Overland Park.

Located at 9220 Metcalf Ave., the site was previously Geo’s Pizzeria, which closed in November 2018.

Scott Spiegel, co-owner of the franchise, said he and his brother, fellow co-owner Michael Spiegel, are planning to open the restaurant around April 18.

“We want to bring the brand to the Kansas City area and all the cities around and really just grow the brand recognition here because obviously, compared to the rest of the country, there aren’t as many here as there are in other places,” Spiegel said. “That’s the main goal, and obviously deliver the high-quality products that customers will keep coming back for.”

“That’s kind of what sets us apart; everything is freshly sliced,” Spiegel added. “Everything is sliced right when the customer orders it.”

Between the two brothers, they own several other franchise locations, including in Olathe, Lee’s Summit and southern Overland Park. The site at Regency Park was particularly attractive to them because of the new renovations, visibility from Metcalf and new developments in the surrounding area, including Shamrock Trading Corp.’s new high-rise building under construction.

“There’s a lot of development there, so there’s going to be a lot of demand,” he added.

Spiegel said they’re also hoping to create “genuine relationships” with their customers as a way to build community within the sub shop. He also appreciates his customers’ support of an Olathe nonprofit, Braden’s Hope for Childhood Cancer (Giving Day is next month, and all sales on March 25 at the brothers’ locations go toward that nonprofit).

“That’s one of those things that keeps people coming back,” Spiegel said. “We live in a society where we don’t necessarily expect wonderful service when it comes to going out and getting food, but we have found out that when we provide that extra service, people love it and they want to come back for more.”