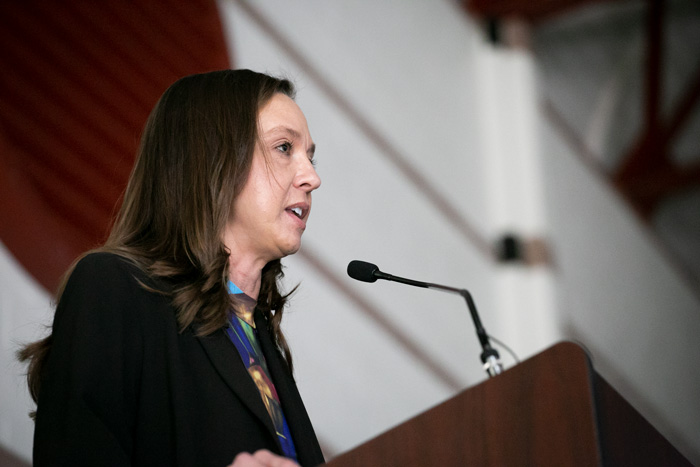 Awards and honors, downtown revitalization and a shared vision for Shawnee’s future were some of the key subjects highlighted by Mayor Michelle Distler in her 2020 State of the City address.

As the city continues to build on its strategic visioning processes, Distler reflected on all the work that has been accomplished so far. The mayor listed several awards and accolades last year that attest to the quality of life in the city, including:

“Believe it or not, that’s not even all the awards and recognitions we racked up in 2019,” Distler said. “We’ll be highlighting a few more throughout our look back at the year.”

The Shawnee Police Department also recently received the Law Enforcement Award of Accreditation. This comes on the cusp of new leadership in the department, as long-time Police Chief Rob Moser prepares to retire after serving 30 years in the city, and Deputy Chief Sam Larson steps up to take his place, Distler said.

The Shawnee Fire Department is also on the verge of new leadership, as Chief John Mattox prepares to retire after 41 years of service (18 of those in Shawnee). Under his leadership, the fire department added Fire Station 74 on Woodsonia and also achieved the ISO Class 1 rating last year, which translates to lower insurance rates for some Shawnee residents.

Revitalization of downtown Shawnee is also underway with a flurry of new activity, including renovations of Aztec Theater, work on the Nieman catalyst site and Sixty16 luxury apartments (formerly Stag’s Spring), as well as the introduction of McLain’s Market (moving into the OK Garage). The city is also in the finishing stretch of reconstruction along Nieman Road — including two new plaza areas with playground equipment and outdoor seating.

“We believe Nieman Now will continue to revitalize downtown Shawnee and make it ‘the place to be,’ so be sure to check it out this spring,” Distler said. “The focus is to bring people downtown and to make it a destination, and we are ever so close to seeing that happen.”

But more work remains, and that’s where the city’s strategic visioning process, Imagine Shawnee, steps in. The next public input process begins in April.

“We are creating a shared vision for Shawnee and it’s all coming into focus,” Distler said. “I hope you join me in that focused effort as we move forward together as a community, as one Shawnee, our Shawnee.”

A video of Mayor Distler’s 2020 State of the City address is below: