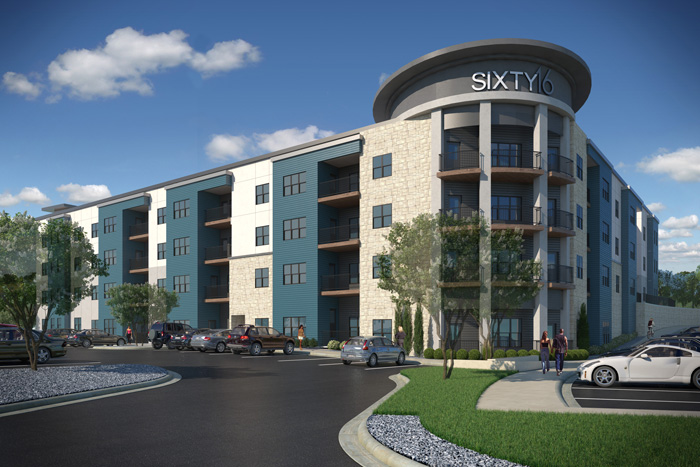 Here is an updated rendering of the luxury apartment complex coming to downtown Shawnee. Formerly called Stag's Spring, Sixty16 is slated to open in February 2021.

Site work for a luxury apartment complex in downtown Shawnee has begun, and the developer for the site has given it a new name.

Developer Kevin Tubbesing recently broke ground on Sixty16, formerly known as Stag’s Spring. The $13 million project consists of an 85,000 square foot multi-family complex in one building on about 2.7 acres at the northeast corner of Nieman and Roger roads.

“We’re proud to be under construction with the Sixty16 apartments in downtown Shawnee as we follow up on the Stag’s Creek development, which created a new gateway into the city on Shawnee Mission Parkway,” Tubbesing said. “Construction will continue through 2020 and we’re looking forward to first occupancy next February.”

The apartments will contain 67 luxury units. Tubbesing said he intends for the apartments to provide “connected living for its residents amongst the growing amenities in downtown Shawnee.”

Sixty16 will offer studio, one- and two-bedroom units as well as outside balconies for each unit.

“Our premium units feature greater than 10-foot ceilings, and our grounds offer over an acre of greenspace, patio and gardens,” Tubbesing added.

Here’s another updated rendering of the courtyard space:

Pre-leasing is slated to begin in July.

The city of Shawnee in December 2019 approved a public financing package of up to $3.1 million in tax increment financing, redevelopment agreement and issuance of up to $5 million in industrial revenue bonds for the project.