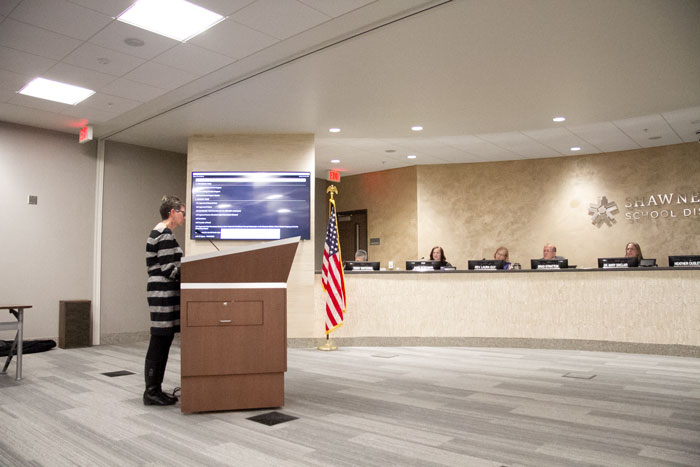 National Education Association-Shawnee Mission President Linda Sieck struck a conciliatory tone in remarks to the board of education Monday. The district and its teachers are trying to bridge a divide that opened up during this year’s contract negotiations

Editor’s note: We gave the board of education the opportunity to respond to the concerns raised by teachers in this story. Board president Heather Ousley submitted detailed answers that we’ve published in their entirety here.

The Shawnee Mission Board of Education chambers were notably quieter Monday than they have been the past several months.

Absent was the standing-room-only crowd of teachers clad in red that had been packing the room to lobby for a new contract. Instead of a steady stream of people approaching the microphone to make impassioned cases for better working conditions and compensation for teachers, Monday’s meeting saw National Education Association-Shawnee Mission President Linda Sieck make brief remarks striking a conciliatory tone that matched the comments made by Superintendent Mike Fulton a few minutes earlier.

With the board’s move to approve a unilateral contract at the end of January, and the Kansas Department of Labor’s ruling two weeks later that the second and third years of that contract were unenforceable, the months-long battle over a deal for teachers for the 2019-20 school year is now settled — even if both sides have been stung in the process.

In her comments, Sieck wasn’t shy about noting how difficult and damaging the protracted negotiations and their aftermath had been.

“It would be an understatement to say the past several months have been challenging for all of us, and have taken a toll on us professionally and personally,” she said.

But she also made clear that the teachers union was ready to leave those difficulties behind.

“Now is the time to find a way to move forward together in the best interests of our students and our staff and the district as a whole,” she said. “Our patrons need to see that all parties, NEA-Shawnee Mission, the board of education and district leadership are committed to work collaboratively to find common ground. And I’m here this evening to let you know that NEA-Shawnee Mission is willing to come together so that we can get together and move forward.”

Sieck’s and Fulton’s commitment to bridging the divide were welcome news to those who had become increasingly concerned about the damage done to the district by the disconnect between the central office and its front line employees.

But as the parties begin the process of patching things up, it’s worth asking: How did the administration and teachers get so far apart in the first place?

Shawnee Mission teachers were largely excited about the arrival of Jim Hinson as superintendent back in 2013. But by the time he announced his departure from the district four years later, many were just as excited to see him go.

Hinson came in to the position with an aggressive agenda, pushing forward massive infrastructure projects, millions invested in improving school security, and the 1:1 technology initiative that provided an Apple device to every student K-12. He also set about expanding the central office staff, and built a gleaming new home for the administration in the Center for Academic Achievement.

Most of this was welcome news to teachers, who were excited to see the district modernizing. But it didn’t take long for bumps to emerge.

Teachers were told that they were expected to have students use the new iPads and Macbooks on practically every lesson, but were given only minimal training on how to incorporate the devices into their classrooms. Those issues were compounded by the fact that connections to the wireless internet in many buildings often failed, leaving teachers trying to fix technology issues instead of focusing on their students.

Lindsey Meyer, an elementary teacher at Prairie who has been with the district for 16 years, recalled the frustrations many teachers experienced with the 1:1 roll out and its aftermath.

“When we had problems, which is daily, we weren’t trained for troubleshooting,” she said. “All you want to do is teach, but now you have to be the IT person.”

Those weren’t the only increased expectations. The district started moving toward a model that sought to provide students with an individualized learning experience tailored to their needs. This meant teachers were expected to create new lesson plans, have additional meetings with other teachers to collaborate on teaching approaches, and document their work with each student. While teachers recognized that these initiatives had students’ best interests at heart, they were also finding their time stretched to the limit.

“Just every year it was more and more requirements that you had to meet,” said Heidi Walker, a teacher at Hocker Grove who has been with the district since 2005. “And there is never anything taken off. There are only new things added on.”

These increased demands and expectations were coming at a time the district was seeing its demographics shift sharply, with more students who had experienced childhood trauma and more students from lower socioeconomic statuses in the classroom. Those students often have different and greater needs than their peers, which can add a layer of complexity to classroom management.

Laura Holland, a kindergarten teacher at John Diemer, said it became increasingly difficult to meet the central office’s expectations, especially as she saw the number of students in her classroom growing.

“Doing what they call for is really hard when you’re near the cap [on class size] because there are a lot of different behaviors in kindergarten,” Holland said. “I’m not sure the administration really understands what it’s truly like being in a building teaching today’s generation of students.”

Meanwhile, Kansas’s budget woes and the legislature’s refusal to allocate more money to the public education system was leading Hinson’s administration to increase the work load for many teachers. Elementary schools moved to a new schedule for specials — music, library, gym and art — that added as many as six additional classes to some teachers’ weekly workload.

And then there were secondary teachers. While some middle and high school staff members had been teaching six sections a day instead of the traditional five for several years before Hinson’s arrival, those situations were not the norm — and a teacher who taught six sections a day one year would often be reduced to five sections a day the next.

When Hinson arrived, his administration pointed to the state’s budget issues as the motivation to make six sections a day the norm for secondary teachers.

“His decision moved almost all teachers to six sections with the hope that better funding would lead to hiring more staff to reduce the load back to five sections,” Sieck said.

That reduced work load never came. And, as teachers made clear in months’ worth of public comments to the board, the six sections per day schedule has led to increased stress and burnout.

Amie Schick, a math teacher at SM North the past two decades, said she’s been disheartened to see a number of talented young teachers leave the district or the profession entirely as a result of the schedule the past few years.

“There have been so many good — I mean really good — teachers who have left because they couldn’t take the work load,” she said. “It was kind of, okay, maybe I’m going to be making a little less somewhere else, but I’m going to be happier. I’m not going to be as burned out.”

When Hinson left and his deputy Kenny Southwick took over as interim superintendent the following year, teachers figured little would change. But with major turnover on the board of education in 2017 and the selection of Mike Fulton as the district’s new superintendent in 2018, many teachers felt optimistic that better times were on the horizon.

Expectations and outcome out of sync

Fulton’s approachable demeanor, effort to get out and visit staff in their classrooms and frequent comments lauding the importance of teachers had Shawnee Mission educators feeling good about where things were likely to be headed.

“Here was this nice, caring gentleman with a loving smile,” Meyer said. “We thought, okay, he’s going to come in and do more than put a bandaid on this situation.”

Coupled with a Kansas Supreme Court decision that required the legislature to increase the amount it allocated to K-12 schools, teachers believed that this was the year they would finally start to see more investment in classroom personnel.

“The first year, we thought, okay, we can wait,” Walker said of teacher’s attitude about Fulton’s tenure. “He’ll have his feet fully under him in year two. We’re finally going to see some kind of a work reduction. Or if not that, some kind of substantive raise.”

That made the way this year’s negotiation session played out from the start deeply disheartening for many. Teachers wanted to see meaningful moves to reduce workload and class size. Absent that, they expected to see a significant increase in compensation to account for what they now had on their plates.

But the board was working with numbers that didn’t add up the way the teachers wanted them to. The fact finder’s report largely sided with the district’s position, saying that the union’s compensation proposal was “overly aggressive to meet reasonable budget objectives of the District, including deficit spending and the creation of a sub-standard fund balance – and contrary to the overall public interests.”

When the board and administration moved to adopt a three-year unilateral contract instead of a shorter one (the fact finder had urged the parties to come to terms on a two-year deal), teachers felt like they were being pushed to the side.

“When the current superintendent came, we were excited. We thought, okay, he’s going to turn it around, and this is going to be a happy place to work again,” Holland said in the days after the board approved the three-year unilateral contract. “But morale is horrible now. I almost feel like it’s worse.”

Moreover, many were shocked that the district would adopt a unilateral contract without a firm plan for addressing the secondary teachers’ workload. The unilateral contract said the board would make recommendations on the issue by June of this year in hopes of beginning to phase in the workload reduction in the 2021-22 school year.

“It was disappointing and frustrating,” Schick said. “That ending, I really thought they were going to figure out a way to cut us back to five. I just didn’t think they could afford not to in terms of teacher morale.”

The Department of Labor’s decision on the teachers’ complaint about the length of the unilateral contract means the parties will, in fact, be negotiating again this year — a move the three-year contract sought to avoid. Teachers say they’re hopeful that they can reestablish solid relations with the board and administration as those negotiations get underway in earnest in the coming months. And Fulton has extended an olive branch as well.

At Monday’s meeting, Fulton thanked Sieck for her work on behalf of teachers, and noted they had discussed bringing in a mediator at the start of this year’s negotiations in hopes of avoiding the kinds of problems that beset the process this last go around.

“I just want to thank you for your work and our continued partnership to bring any issues that need to be resolved to conclusion,” Fulton said.