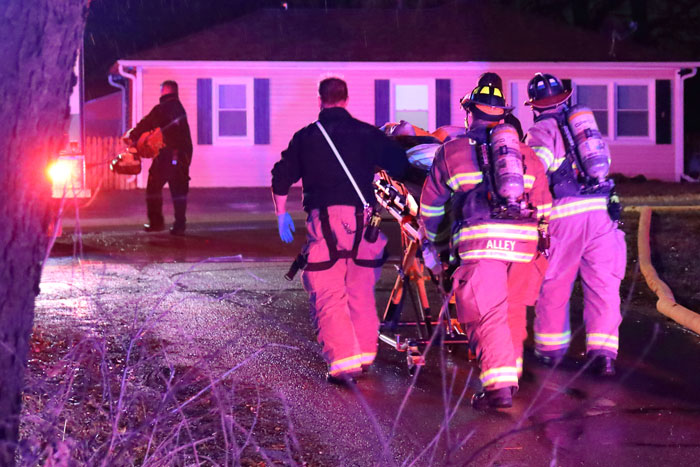 A woman in her 40s is in critical condition after she was rescued from an apartment fire near 87th Street and Grant on Monday evening. On Tuesday, fire investigators announced that the fire was caused by careless smoking.

Firefighters from Overland Park and Lenexa were called to the Four Seasons Apartments at 9510 West 87th Street just before 9 p.m.

Overland Park Police were first to arrive on the scene and reported smoke coming from a second-floor apartment. A neighbor told police that they had not seen the woman who lives in the apartment. An officer was able to get into the apartment but was forced back outside by the smoke.

Firefighters were able to rescue the woman from the apartment a short time later. She was transported to the University of Kansas Medical Center in Kansas City, Kansas where she is said to be in critical condition.

Overland Park Fire Department Media Manager Jason Rhodes says firefighters had the fire under control within 10 minutes. The damage was contained to the apartment where the fire started.

Johnson County Med-Act transported the police sergeant who initially tried to rescue the woman from her apartment. Rhodes says the sergeant is being treated for “minor smoke inhalation.” No other injuries were reported.

Fire investigators say the fire was accidental, caused by careless discard of smoking materials.No working smoke detectors were found in the victim’s apartment.

“If you need assistance with smoke alarms, contact your local fire department,” Rhodes said. “Additionally, smoking materials should always be completely extinguished in sand or water before discarding.”

The Red Cross is assisting two adults and three children who were displaced by the fire.