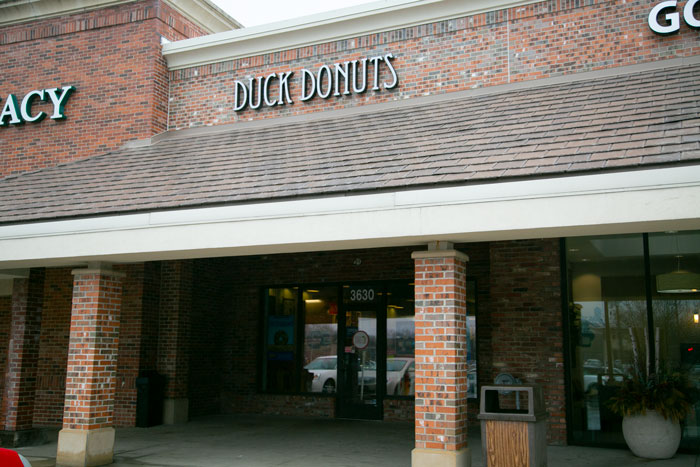 Duck Donuts will close up shop at Leawood's Ranch Mart Shopping Center and open at a different location, not too far from their current space.

A year-and-a-half ago, the first Duck Donuts in the Kansas City metropolitan area opened at Ranchmart in Leawood. Now, the business getting ready to move — though not too far, say the owners.
Owner Ryan McNeil said the business and customer base has evolved over the last 18 months, and it’s time for the space to fall in line.

“We realized we needed a space to fit our evolution and growth,” McNeil said. “It looked to be like Ranchmart just wasn’t going to fit that need any longer.”

While the owners prepare for the move, the donut shop will close its doors for a period of time. Additionally, the last day Duck Donuts will be open is Sunday, March 1. Updates on the timing and details of a Duck Donuts grand re-opening — at a location which McNeil said won’t be too far from the current location — will be announced on Facebook.

Duck Donuts is a franchise that originated in Duck, N.C., in 2007, according to the Duck Donuts website. As of 2018, there were 222 stores nationwide, and the Leawood location is the only store in Kansas. McNeil said plans to expand have gotten held up for a variety of reasons, but he and his wife, Katie, still plan to open more locations in the Kansas City metro.

Customers can customize donut toppings and purchase made-to-order donuts all day long. The Leawood Duck Donuts is open Mondays and Tuesdays from 6:30 a.m. to 3 p.m., and Wednesday through Sunday from 6:30 a.m. to 7 p.m. The timeline for the opening of the new location is not yet certain, McNeail said.

“[The move] is going to allow us to have a physical footprint that fits the store that we definitely want for the future, and customers will see that as well,” McNeil said. “Be patient with us — we won’t be out too long, and we’re not going too far. We’re excited to bring a better version of Duck Donuts.”