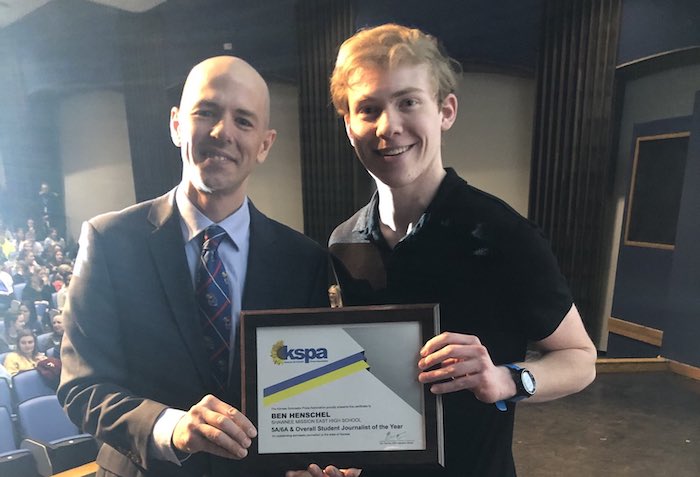 Ben Henschel (right) was named the 2020 Kansas Student Journalist of the Year on Friday at the University of Kansas. Photo via Twitter

SM East senior Ben Henschel, who serves as editor-in-chief of his student newspaper, The Harbinger, was named 2020 Kansas Student Journalist of the Year.

The Kansas Scholastic Press Association gave Henschel the statewide honor at a regional competition Friday at the University of Kansas in Lawrence.

“Henschel’s online portfolio showcases a variety of work, but especially in-depth coverage of tough subject matters, including issues within his school district’s special education system, potential student risks of a popular app and inequities within the college admissions process,” the Kansas Scholastic Press Association shared in its blog. “The judges especially commended Henschel on his coverage of the local effects of the 2014 shootings at the Jewish Community Center of Greater Kansas City and more recently a Walmart in El Paso, Texas.”

Henschel said the honor speaks to the quality of The Harbinger staff and their contributions to his work.

“It’s one award for journalist of the year, but everything that goes on in The Harbinger, all the work that I’ve put my name on, whether or not there’s a byline there, there’s always contributions from everyone, whether it’s finding sources or edits or stuff like that,” Henschel said. “The best work I could ever put out is a by-product of everyone’s. It really isn’t something I can really accept myself because we’ve got a great staff of around 60 people that makes sure that everything is as good as it really can be in the moment.”

A student-journalist who has been involved in the Harbinger for the past two years, Henschel is diversifying his portfolio with a range of broadcasting and digital experiences, such as redesigning Harbinger Online and managing content, sports commentating and starting his own podcast.

“There’s no better time to do that,” Henschel said. “Every two weeks printing a newspaper only goes so far. We’ve got to have a presence that’s continuous.”

Journalism has been a growing passion of his since he first got involved his sophomore year. Since then, he has grown into his management role in which he can help his classmates grow their own portfolios. He also enjoys reporting more in-depth pieces; for instance, he has been following the development of the Shawnee Mission teachers contract.

“If I get into something, I just want to work really hard at it,” Henschel said. “I’ve just continuously gained steam with it. It’s been my favorite thing ever since.”

This new recognition is one of many accolades Henschel has received over the years. Here are a few other awards either he or the Harbinger has received:

As the Kansas Student Journalist of the Year, Henschel will be considered for the national competition, which takes place in April in Nashville.﻿