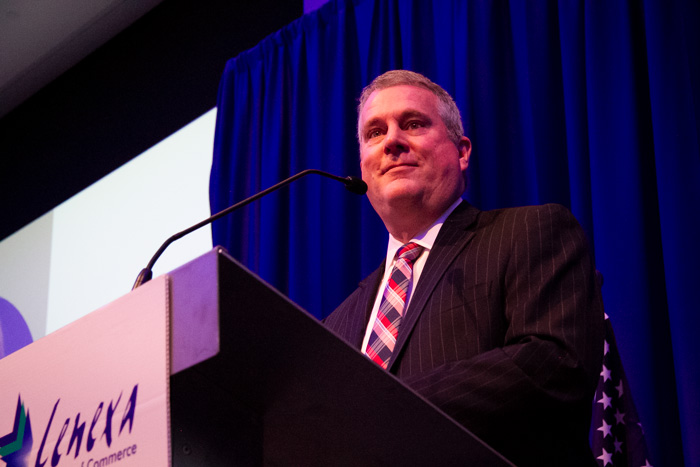 Michael Boehm gave the 2020 State of the City address, his 18th as city mayor.

A happy and engaged citizenry, paired with continued investment from commercial developers are the outcomes of a long-term “pro-growth” attitude in Lenexa, Mayor Michael Boehm said Wednesday in his 18th State of the City address.

Citizen satisfaction survey results consistently rank Lenexa higher than the average city in the metro area over such services as public safety, parks and recreation and snow removal, as well as its long-term vision of planning growth throughout the city, Boehm said.

“When you see outstanding results time after time, it might be tempting to think that great outcomes are easily achieved; this is simply not the case,” Boehm said. “Our tremendous results are the work product of dedicated individuals who work to make our community exceptional.”

Boehm thanked city leaders and staff department heads, especially those who have contributed several years to both the long-term development of the city and the making of Lenexa City Center, as well as the city’s “strong financial position” and commercial tax base that comprises nearly half of city revenue.

Boehm said Lenexa is not done yet. Much work remains, including plans for upgrading the city’s public safety facilities, new infrastructure projects guided by the city’s Complete Streets plan, review of the future of aquatics in the city (especially regarding Ad Astra Pool, which city leaders kept open this year during this process) and several projects in Old Town, including:

And Boehm received some applause when he announced that the Kansas Department of Transportation is planning to mill and overlay I-435 from K-10 to Midland this spring.

“The year 2020 has special meaning for Lenexa,” Boehm added. “As we talked about earlier, we have achieved much of what was imagined in 2020.”

A video of Mayor Boehm’s 2020 State of the City address is below: