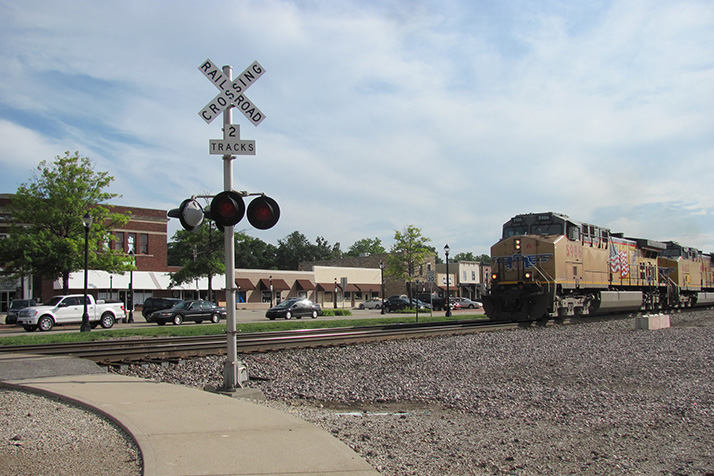 With development booming at City Center, some city leaders are hoping to find ways to revitalize Old Town.

Contracts with the city of Lenexa are approved to install wayside horns along the train tracks through Old Town — and now, the city must play the waiting game.

Homes and businesses in the area can experience up to 90 decibels of sound from the train horns passing through, up to several blocks away from the train tracks. Once the wayside horns are installed, the sound will be directed along the roadways near the railroad crossings and “greatly” reduce noise in the surrounding neighborhoods, according to city documents.

Steve Schooley, transportation manager for the city, said the primary unknown now is when. The two companies must make preparations of their own, and some site work must be completed before they install the wayside horns.

“I’m hopeful that it will be soon, but I don’t have a date or a time that I can tell you when those will be installed,” Schooley said.

Nonetheless, city leaders expressed relief and enthusiasm for taking this next step. Residents made frequent inquiries about the blasts of the train horns when the trains pass through Old Town, especially in the summertime when windows are open.

Here is a depiction of the noise reduction from the wayside horns, compared with the noise from the train horns:

City staff said the wayside horns project has been on hiatus for about two years while the two companies worked through the process.

Schooley noted that installation of devices along the tracks — which would then allow the trains to silence their horns — would have cost up to $1 million per crossing.

Councilmember Bill Nicks noted that, while the wayside horns are a step forward, the railroad has been an integral part of Lenexa’s history that he wished to commemorate. Notably, these agreements were approved on the 188th birthday of Octave Chanute, a civil engineer who platted the city of Lenexa. Nicks plays the role of Chanute in historical reenactments.

The Lenexa city council unanimously approved the agreements. There was no public comment, although several councilmembers shared their support for the project.