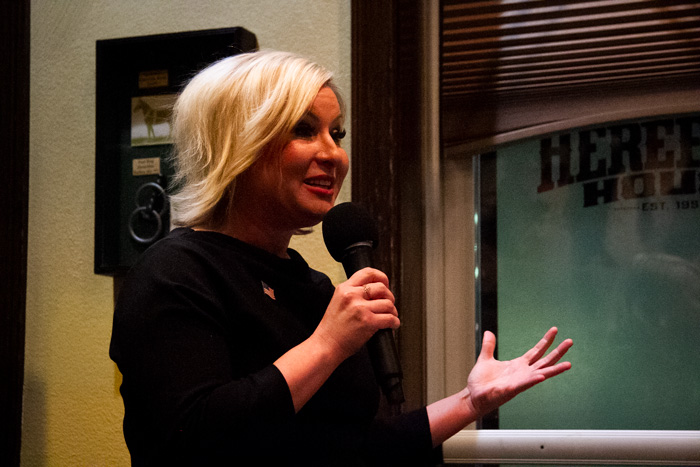 Term limits, a strong economy and a policy of limited government were some of the dominant subjects highlighted by Sara Hart Weir, one of the candidates running for the Third Congressional District seat, in a public presentation to the Northwest Johnson County Republicans on Monday evening.

Hart Weir, a former nonprofit executive, was the first Republican to enter the race in July 2019. She faces Amanda Adkins, an Overland Park resident and businesswoman who entered in September, as well as former Roeland Park mayor Adrienne Foster, who announced her plans to run in October. The three are vying to challenge first-term incumbent Democrat Sharice Davids, who defeated Republican Rep. Kevin Yoder in 2018.

Hart Weir said she’s running to ensure that someone “who represents Kansan values” can win back the seat in November.

“In order to drain the swamp and work alongside President Trump and take on those career politicians in Washington, we actually have to drain our swamp here in Kansas,” she said. “I’m the candidate in this race that’s not a career politician. I actually have real-world experience. I have served and led for people that are the most vulnerable in this country. And it’s something that we need to do in order to drain the swamp in Kansas.”

An Olathe native who now lives in Mission, Hart Weir has served as president and chief executive officer of the National Down Syndrome Society. Citing her advocacy work for those who live with a disability, she said gaining bipartisan support and finding common ground will be key to addressing issues facing the country. She believes this is one of the most important ways to attract votes of suburban moms in the district.

If elected, she said she hopes to address issues related to take-home pay, affordable childcare and college education and “other economic policies that support President Trump’s agenda.”

Hart Weir shared her views on a number of items:

During the meeting, Jane Dirks, a Republican precinct committeewoman from Overland Park who is challenging incumbent Rep. Jan Kessinger, for the District 20 seat, introduced herself and gave a few remarks on her platform. A self-described lifelong conservative Republican, she considers herself to be “strongly pro-life.”

Among those in attendance at the meeting were Michael Ashcraft, who serves on the Johnson County Board of County Commissioners, as well as Shawnee councilmembers Eric Jenkins and Tammy Thomas.