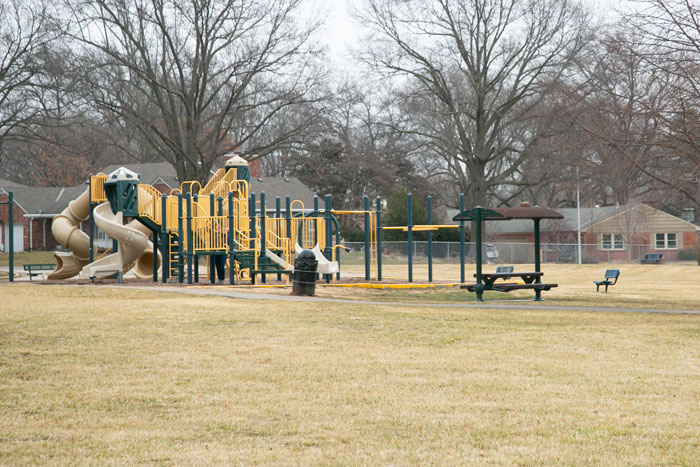 Potential Mohawk Park renovations include the construction of a restroom, readjusting the soccer fields and a basketball court.

The city of Mission on Thursday evening held a public meeting to get feedback from residents on the upcoming improvement project at Mohawk Park, at 67th Street and Lamar Avenue.

Confluence, a landscape architecture, planning and urban design firm in Kansas City, and SFS Architecture are leading the Mohawk Park Master Plan. The Confluence team, including Senior Principal Terry Berkbuegler, presented two preliminary options for the park, both of which included the following:

Berkbuegler said the options presented to the room of approximately 50 attendees were not at all set in stone, but were put together to offer them something to bounce ideas off of. If there was something attendees liked, disliked or saw missing, the team wanted to hear it and take those comments back to the drawing board, he said.

One resident asked if there were plans for additional lighting at the park, to which Confluence Associate Hank Moyers said lighting is currently limited to the parking lots. Another resident said he was not a fan of bringing the trail loop close to the backyards of houses along Woodson Drive because people may begin to hang out closer to the backyards.

Other inquiries included who would be in charge of cleaning the restrooms and how often they would be cleaned, if there would be any regrading done at the park, and if there would be areas designated for hanging out or growing flowers. Additionally, Mohawk Park is not currently a contender for a dog park element, City Administrator Laura Smith said.

The idea of a dog park element at an existing park has been thrown around for Broadmoor Park, 5701 Broadmoor Street, Smith said. A similar public input meeting for improvements to Broadmoor Park may take place this summer, she said.

There is no current cost for the improvements to the Mohawk Park, but Berkbuegler said the prices of the options presented were comparable. Confluence and SFS will take the feedback received Thursday evening and develop a final master plan. That plan will be presented on March 17, 2020, at 6 p.m. at Sylvester Powell Jr. Community Center.

‘We have to police the police’ — Mission continues racial equity efforts with police hiring, accountability discussion