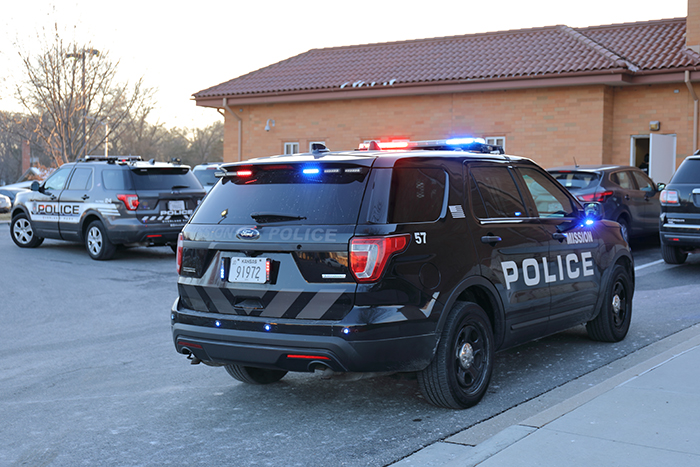 Police from Mission, Fairway and Overland Park responded to the report of men carrying weapons into a baby shower at the Sylvester Powell Jr. Community Center in mid-February. Photo credit Mike Frizzell.

Mission Police continue to investigate after two men allegedly walked into a baby shower at the Sylvester Powell Jr. Community Center with guns in their waistbands early Saturday evening.

Officers were called to the community center, located at 6200 Martway Street just after 5 p.m.

Recorded radio traffic indicates the two men walked into the multi-purpose room, where a baby shower was being held. Approximately 20-30 people were reported to have been attending the party.

Mission Police Captain Kevin Self says officers are still working out the details of exactly what happened.

“I can tell you that there are reports of a handgun being displayed,” Capt. Self said in an emailed response to questions. “Other than that, not many more details.”

Radio traffic described the two men as black males; each reportedly had a gun tucked into his waistband. Witnesses told police that both men left in a vehicle before officers were able to arrive.

Johnson County Med-Act along with Consolidated Fire District No. 2, had crews staging nearby for potential injuries. Those units were allowed to clear from the scene after officers determined that no one had been injured.

Police officers from Overland Park, Fairway, and Merriam also responded to assist on the scene.