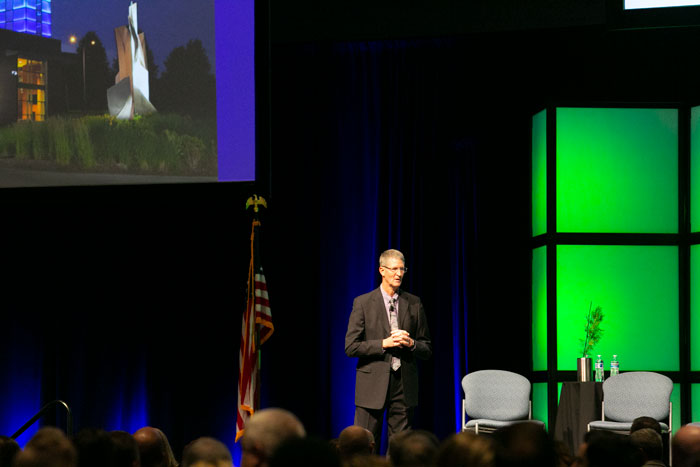 After 60 years of incorporation as a city, Mayor Carl Gerlach said Thursday that he credits Overland Park’s success to a history of intentional leadership.

Hundreds gathered at the Overland Park Convention Center on yesterday afternoon to hear Gerlach deliver the 2020 Overland Park State of the City address. Gerlach mentioned the various factors that led to the city’s recognition on lists as a great place to live, including education, strong community relations and quality of life.

The expansion of U.S. 69 Highway is both a top priority and the biggest challenge for Overland Park, Gerlach said. Current numbers show it would cost $300 million to completely rebuild the highway and add two lanes on either side, he said.

City leaders decided to explore the possibility of a toll system on the highway to fund the expansion in November 2019. Results from a preliminary feasibility study should be available by March, but if the city doesn’t consider funding options, expansion may not occur for 10 years, Gerlach said. Lorenz said KDOT has $435 million worth of delayed projects to complete, and outside of those projects, nothing will be added to the pipeline.

The toll system would be an express lane added to both sides of the highway, which drivers would have the option to utilize. Additionally, KDOT would construct and maintain the expansion, and collect a percentage of the tolls to pay for it. If the preliminary study shows residents are interested in this option, an in-depth feasibility study would follow and could take up to 18 months, Lorenz said.

Since this would be the first toll system of its kind in Kansas, Lorenz said specific details have not yet been ironed out.

Back in the 1960s to 1980s, Gerlach said Overland Park was seen as a “bedroom city.” There weren’t enough jobs for residents to not have to drive to a different city for work. But the steadily increasing population, at almost 200,000, has brought in over 7,000 jobs in the last five years, he said. Today, the city is one of two “prevailing job centers of the entire metropolitan,” he said.

“It’s crucial that we remain a community of choice for residents and businesses for new jobs,” Gerlach said. “We need to do that by never losing sight of our duty to be fiscally responsible. I want to make it clear: we do not ever put Overland Park’s finances at risk.”

Despite the recent federal court approval for a Sprint and T-Mobile merger, Gerlach said he’s still not bent out of shape with Sprint. He said the city has a great working relationship with the company, and said that he is comfortable with Sprint as the merger will bring 5G to the area.

Another main topic was the construction of a new fire station for training students at Blue Valley Southwest High School. Incoming Superintendent Tonya Merrigan said the program, which will work similarly to the district’s CAPS program, offers hands on experience necessary to form the partnership.