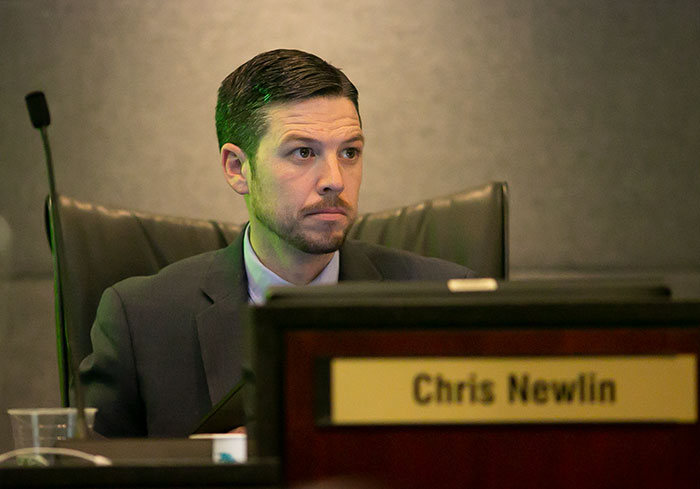 City Councilman Chris Newlin, seen in a file photo, would chair the new mental health task force if the proposal to establish the group is approved by the full city council.

A mental health task force was not exactly what Overland Park transparency advocate Sheila Albers originally asked for. But she said Wednesday she is pleased that the city council’s public safety committee took the first steps toward a group that will invite diverse public participation on city policies pertaining to mental health.

The added transparency is important, she said, “because with that transparency we are able to identify where systems have not worked for people.” Albers, whose son died in a police shooting, added that she was glad that Councilmember Faris Farassati asked that police use of force be included among the topics the task force will examine.

“I’m super pleased we’ve created a task force that is open to the public and encourages participation,” she said.

The committee unanimously recommended that the city set up an advisory group that will identify the mental health needs of the community and recommend changes where needed. If approved Monday by the full council, the group would have representatives from Albers’ advocacy group, JoCo United, plus another yet-to-be-determined advocacy group, and representatives from the city staff, police and fire department, county mental health center, Med-Act and justice department. It would be chaired by Councilmember Chris Newlin.

Albers and her husband Steve have pushed for more transparency and a better training policy for police officers since her son John was killed by an officer in 2018 while driving out of the garage. Police had come to the Albers’ home in response to friends’ concerns about the 17-year-old’s mental state.

Since then she has reached a settlement in a wrongful death lawsuit on the incident and has lobbied for changes in the state open records requirements on officer-involved shootings.

The mental health task force would look at the training and policies of the police department’s Crisis Intervention Team program. But it would also examine broader mental health resources and access to them.

Albers said after the meeting that she would like public safety to be emphasized. “I personally think this is a safety task force not a mental health task force because ultimately what we’re talking about is people’s health and safety,” she said.

“I don’t think you can separate the use of force policies from the mental health issues because the two are highly connected,” she said.

In particular, Albers said the city’s police training should align with neighboring communities that advise that shooting into a moving vehicle is generally not effective.

“If we had better policy we’d have better training and then maybe the outcome for my son would have been different,” she said.

The city will seek some participants through an application process which would begin shortly after the council’s approval. The group then would meet monthly beginning March 20, with hopes of getting the most immediate needs identified in time to be considered in next year’s budget, said Police Chief Frank Donchez. Newlin said he thought the group’s main work would take about 18 months.