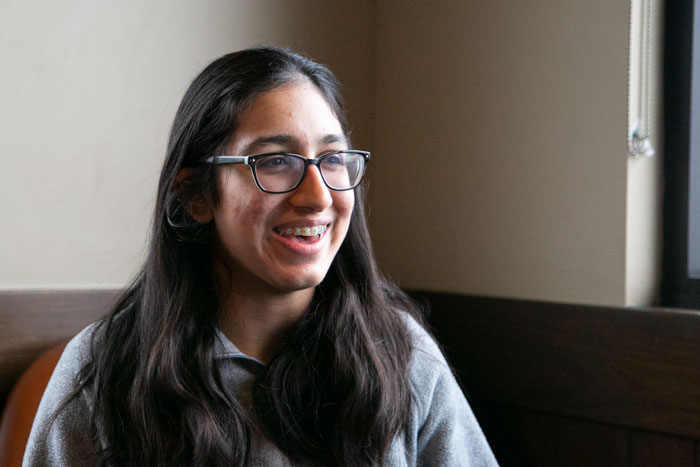 When Ishya Bhavsar was young, she would watch spelling bee competitions in her parents’ room. In the fourth grade, she decided she wanted to compete herself.

Now, the Indian Hills Middle School seventh grader is headed to the Sunflower State Spelling Bee. After successfully spelling “legerdemain” — which can be described as “sleight of hand,” according to the Merriam-Webster Dictionary — Bhavsar won the 2020 Johnson County Spelling Bee.

“I’m excited and kind of nervous [about the state spelling bee],” Bhavsar said. “I’m not sure if it’s nervousness, or the feeling of wanting to do good there.”

At this year’s state spelling bee, Bhavsar will compete against winners from counties across Kansas including Atchison and Wyandotte. But Bhavsar is no stranger to spelling bees: She was one of two Shawnee Mission School District students who competed at the Scripps National Spelling Bee in Washington, D.C., last year — against over 500 other spellers.

To prepare for this year’s Kansas spelling bee, which will be held in Wichita in March, Bhavsar said she is essentially “filling [her] life with words.” Currently, she’s practicing with a list of words that her mom uses to quiz her.

“I get really nervous on stage, so kind of just thinking that I don’t really have control over what word I get asked and that I’m going to do my best when I’m up there,” Bhavsar said. “There’s really nothing to be nervous about because I’ve prepared all I can.”

In addition to participating in the state spelling bee, Bhavsar will also represent Indian Hills later this month at Model UN in Topeka as part of the school’s delegation, Revelle said.

“Ishya embodies the engaged, empowered and excited learner at Indian Hills, and we are so incredibly proud of her,” Revelle said.

The Sunflower State Spelling Bee will be held at Newman University in Wichita on March 21. The official competition will begin at 12 p.m. after a practice round at 9 a.m.