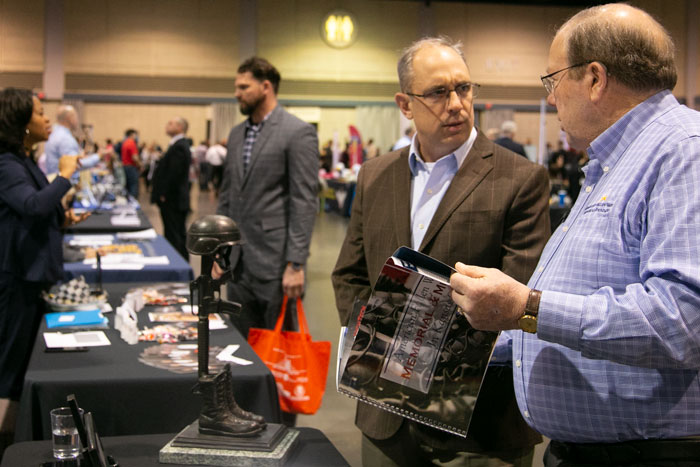 Brad Hilton spent a little over 30 years in the United States Army: He served in the National Guard, flew helicopters and worked in information technology.

When he retired and prepared to transition into the civilian world, he was looking for an opportunity that would make use of the skills he’d learned in the service. He hit the Greater Kansas City Veteran Job and Transitioning Fair to learn about possible opportunities.

A year later, he was back — but on the other side of the equation. Now the Chief Information Officer at Net Standard, a veteran-friendly information technology and managed technology firm in Overland Park, Hilton attended this year’s fair not to seek a job, but to support other transition veterans.

Hundreds of people — including employers, vendors, veterans, military members and their families — gathered on Tuesday at the Overland Park Convention Center for Grantham University’s Third Annual Greater Kansas City Veteran Job and Transitioning Fair. Overland Park Mayor Carl Gerlach, who thanked the organizers of the fair for their work and dedication as it opened, proclaimed Feb. 11 as Hire a Veteran Day across the city.

Military members, veterans and their families had free access to workshops on resume building and interviewing, free professional photos and a chance to talk to potential employers. More than 150 companies attended the event, including Cerner Corporation, Evergy, Garmin and Sprint. National organizations such as the Social Security Administration and the United States Postal Service were also in attendance.

When Hilton retired from the military in February 2019, he had a job lined up with Amazon. Even still, he said transitioning out of the military was difficult.

“[It] is a life changing event going from, in my case, one organization and learning the ways we do things to the civilian world, in and of itself [that] was very stressful,” Hilton said.

The job fair also offers veterans and military members a chance to network, which is crucial as veterans transition, Hilton said. At last year’s job fair, Hilton said he intentionally made connections with each employer and organization — whether or not it was a good fit for him.

While the job fair offers a variety of opportunities for veterans and military members, it’s a two-way street, Hilton said. Employers and organizations that participate are given a chance to understand the unique experiences and talents that veterans bring to the table.

“We hear a lot about the desire for what veterans bring, but I have noticed, in a lot of cases, we don’t know how to ask,” Hilton said.