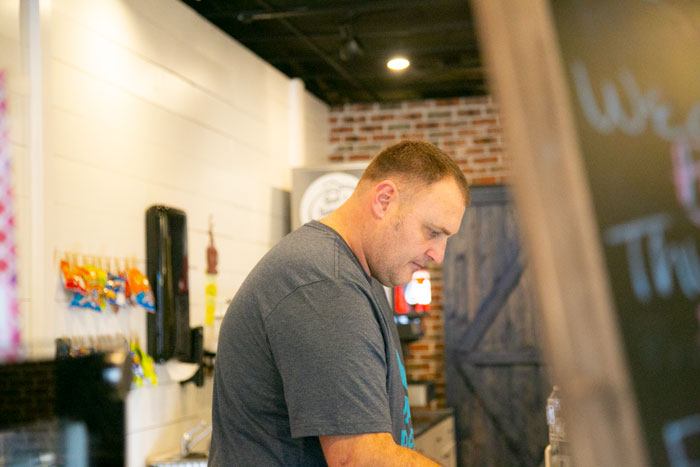 Chris Tanis began his journey as owner and operator of Brian's Bakery & Eatery three months ago.

After losing his job dealing with Ford Motor Company earlier this year, Chris Tanis and his wife Jamie Tanis decided to try something new: own and run a bakery.

Three months ago, Tanis took over ownership and management of downtown Mission’s Brian’s Bakery & Eatery, 5622 Johnson Drive. Tanis said he and his wife had looked at a number of different bakeries, including donut shops, and decided to go with Brian’s because it had a welcoming environment — and there was no renovation necessary. As a first-time business owner, Tanis said it’s been a learning experience.

“[This is] my first time owning a business, let alone a bakery,” Tanis said. “I came into it with a week’s worth of training, and it was definitely an eye opener.”

Since he’s taken over, Tanis has made a few subtle changes to the way the bakery operates: cooking in smaller batches to reduce waste, adding different pastries to the menu and investing in an ice cream cart. Additionally, Tanis said he tries to accommodate all guests, such as playing around with recipes to test out vegan options.

Tanis said he didn’t want to change too much about the bakery because after a year-and-a-half in business, it’s already got its own customer base. That’s why he decided to keep the business named after its previous owner, Brian Sullivan. After about a year owning the bakery, he said he intends to change the name and make it his own.

His current focus is expanding his own customer base and putting names to faces for those who have been with the business since before he took over, he said. In just three months, he’s been able to build a relationship with several regular customers. When he sees their car, he puts their order on a plate and runs it on the register, so when the customer walks in, all they have to do is pay.

“I don’t want my customers to just be customers,” Tanis said. “I want them to be family and friends when they come through the door, like a family gathering.”

Although Tanis was trained by Sullivan and received some of his recipes, Tanis is also creating his own staples. The two most popular pastry items he sells are scones and cake pops, he said. For vegan customers, he offers vegan scones and muffins. He said he hopes to expand his menu to be able to offer vegan breakfast burritos and lunch options, as well.

Tanis is also playing around with the hours of operation, and said he may expand to opening until 4 p.m. on Saturdays and is considering opening on Sundays. Currently, the bakery is open Tuesday through Friday from 7 a.m. to 2 p.m., and Saturday’s until noon.