Shawnee has completed a process of reviewing and improving land use designations for downtown and included those new guidelines in its comprehensive plan.

City leaders on Jan. 27 heard an overview of land use guidelines for the newly created and expanded Townsquare District, which expands past the traditional bounds of the city’s downtown area at Johnson Drive and Nieman Road to include the single-family residential and mixed housing areas surrounding it.

The newly approved guidelines also allow increased residential density, vertical and horizontal mixed-use, and to be contextually and historically cognizant with downtown Shawnee, according to city documents.

Lauren Grashoff, the city’s neighborhood planner, said the changes will provide more direction on current and future development and renovation projects across the greater downtown area, with the intent of allowing a more seamless transition between commercial and residential.

Here’s a look at the new land use guide for downtown Shawnee: 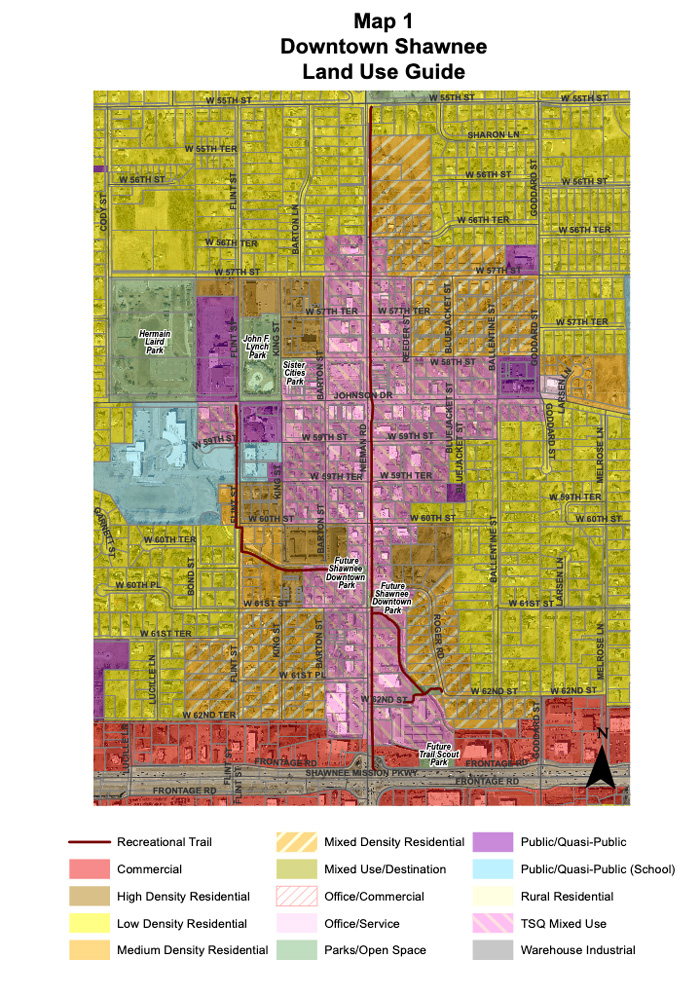 The land use guidelines provide a “20-year outlook” for development and redevelopment downtown, Grashoff said, noting that these guidelines make no changes to zoning designations.

“Flexibility is paramount,” she said. “We really want to emphasize what’s expected and appropriate for downtown.”

Some of those expectations for development and redevelopment as listed in the guidelines include:

“This calls for more consistency with the historic townscape, no or limited access on Johnson Drive, and a focus on reuse and building renovation versus teardown-start-anew,” Grashoff added. “This would be a focal point for density, walkable entertainment, specialty retail, civic and restaurant uses within the Johnson Drive corridor, and development of residential immediately behind the commercial corridor.”

The changes are part of a months-long review process by city staff and the planning commission to compile years of visioning studies. The process included collecting public feedback, a component neighboring resident Carol Mundy praised.

“I want to really thank all of you that have met with us…and talking to us about what the words mean,” Mundy said, noting her appreciation for city leaders and staff listening to neighbors’ concerns with changes. “It’s really nice to be in this city. You guys are a good bunch.”

The downtown section of the city’s land use guide has not been updated since 2005, according to city documents. The city’s previous land use designations did not reflect the city’s goals for the townsquare district, Grashoff said.

“What we currently have really doesn’t reflect what we want to see downtown,” Grashoff said. “It’s calling for office service uses, and the commercial designation was really more consistent with commercial highway, large lot, big box development, which… has not been recommended for downtown.”

The city council voted 7-0 to accept the new land use designations. Councilmember Kurt Knappen was absent.