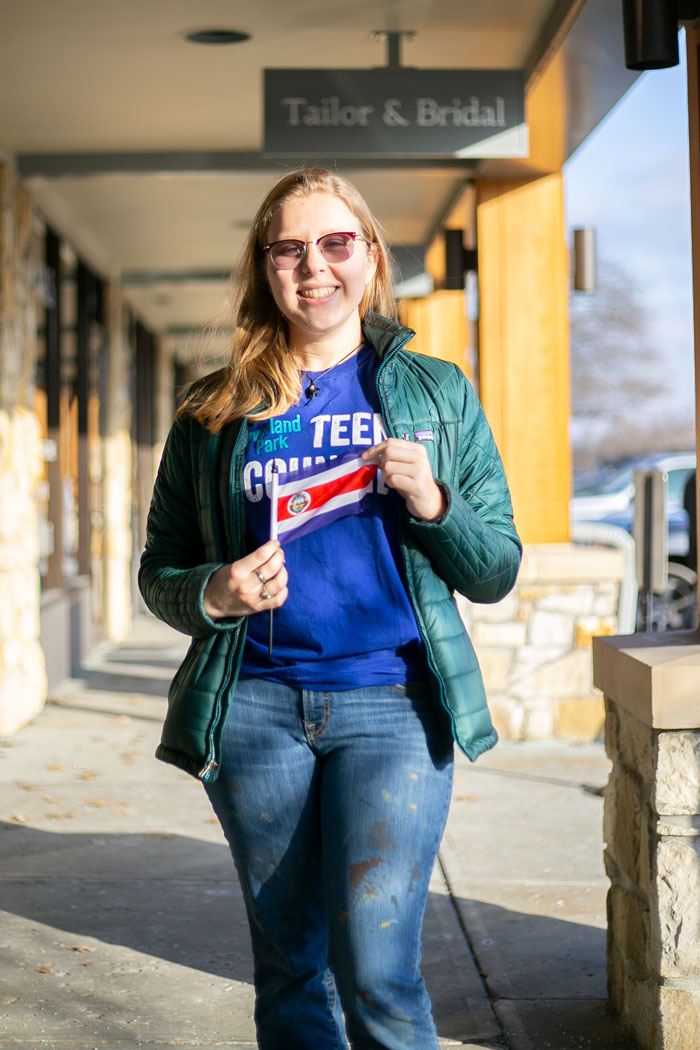 Last summer, Olivia Miller went on a trip to Costa Rica with Ecology Project International and helped baby sea turtles hatch from their eggs near Pacuare Reserve. Her adventure was a lot more complicated than that, but we’re going to focus on her first night of helping a sea turtle lay her eggs on the beach. A junior at Blue Valley North, Miller is planning to pursue higher education in environmental sciences and become a researcher. For now, she lives in Overland Park with her family. When she’s not in school or (literally) saving sea turtles, she runs cross country, plays flute in the marching band, participates in scholars bowl or volunteers with organizations like the Johnson County Library, Deanna Rose Children’s Farmstead or the Overland Park Teen Council.

It was a full moon, but there were clouds over it, so my friend and I were clinging onto each other cause we don’t want to faceplant in front of these very self-respecting marine biologists. We don’t have any flashlights at this point. We’re just trying to stumble along the beach. And every single little lump that we see on the beach, we’re like oh it’s a turtle and the person was just like, no, that’s, that’s a stick. We do this for about three and a half hours.

At about 1:30 in the morning, our assistant said, hey, there’s a turtle. She’s dragging herself up the beach with her fins.

It’s a leatherback sea turtle. You can tell because it’s the largest sea turtle of all of them. We just had to sit behind her while she was digging her nest. You have to go down 70 centimeters, which is really far down, longer than your arms. While she was doing that, she’s just like flinging sand everywhere. Everyone’s face is just covered in sand. We could turn on very small headlamps; they’re red light because it doesn’t bother the turtle as much.

So I had the clipboard and a couple other people were measuring her shell, and I was writing down measurements. It was about 131 by 110 centimeters. So like really big. With the full moon, you could kind of see her a little bit, but even combined with the red lamp, I couldn’t see her very well. We weren’t allowed to bring cameras so I don’t entirely know what she looked like.

All you could hear was the waves and her really deep breathing, because she’s about to go into labor. It was just so crazy. In the dark, it transforms from a black smudge into this prehistoric crazy-looking but amazingly beautiful creature that’s 3 feet away from you and about to reproduce. Very few people can witness that.

This is going to sound cheesy, but I just feel like I have this connection with this one turtle because I was there. I was writing down everything about her that you can tell and helping her reproduce and hopefully preserve the species.

And then here comes the conservation part: Once she got her nest done — once she was done flinging sand into our faces — we shoved a plastic bag under her. If you come across a turtle before it lays its eggs, then you’re able to move them to a safer location where they can check them regularly. But if you come and she’s leaving her nest, then you have to mark it. We caught her just as she was coming up the beach, so we were able to catch her eggs in this bag.

We knew she was a new mother; she laid her eggs within a few feet of where the surf was coming up. If we weren’t there, the tide would come in and the eggs would drown.

At this point it was about 2 a.m. and it started to thunder. So I take the bag, it was about 20 pounds and I had to walk with it for two miles back to the hatchery. We start to dig a couple inches down and it starts pouring. We dug for about 20 minutes. Rain is just dripping down my eyes.

Only about one in every 1,000 eggs laid survives. Not only do they have to get out of their shells, but they have to dig all the way up. And it’s basically a gigantic obstacle course for them: Crabs, dogs, seabirds. So we basically have to have an escort service. They come out of their nest, we count how many come out, and we just walk along with them along the beach — just like in Moana. Their muscles are tiny, so you have to clear the sticks and rocks out of the way, and in a wide radius because you don’t know where they’re going to go.

I want to be on the front lines of conservation work. It’s enough to care about it and do research. I’ve always wanted to do hands-on research, like transplanting coral on the Great Barrier Reef.

In first grade, our teacher showed us this video of baby sea turtles. We watched these sea turtles and they’re falling over themselves, flipping over, and trying to get to the ocean, and the ocean pushes them back and they try again. I never thought that I would be there to see that.