On a 6-1 vote following four hours of closed-door deliberations, the Shawnee Mission Board of Education on Thursday approved a three-year unilateral contract for teachers, a move strongly opposed by their union and one that left many in the audience angry and in a state of disbelief.

Teachers and their supporters packed the board room at the Center for Academic Achievement ahead of the specially called meeting, which followed the district walking away from negotiations on Tuesday at the final possible session in the state-mandated process for teacher contracts.

After convening, the board immediately recessed to a 30-minute executive session, claiming an exemption to the Kansas Open Meetings Act that allows them to discuss negotiations behind closed doors. They emerged to make motions to extend the executive session a total of four times — twice for an hour and twice for 45 minutes. As the night wore on, announcements of a new extension drew smatterings of applause from the audience, the sense being that the longer the board discussed the issue, the less likely it was they would move forward with the three-year contract.

Ousley called for a role call vote. Jamie Borgman, the SM Northwest representative on the board who was just seated earlier this month, was participating by phone, and was the first to speak. She voted no. After that, the other six board members voted yes.

Several in the audience were visibly furious, with calls of “Shame on you!” and “You lied!” to the board members as they left.

Next steps for teachers, union and administration

Linda Sieck, president of the National Education Association-Shawnee Mission, said prior to the vote Thursday that the union had been in discussions with the Kansas National Education Association about a possible legal challenge to the board’s move to push a three-year unilateral contract — a move unprecedented in district history — but that they would not take formal steps until the board had made its decision.

On Tuesday, the union had asked the district to consider a one-year deal with a 1.5% base salary increase in hopes of clearing the table for the current school year and allowing the parties to start fresh on negotiations for 2020-21 — which would have begun in earnest in March.

However, the district rejected that idea, saying it wanted to pursue a three-year deal. The administration issued a press release after Thursday’s meeting concluded that framed the three-year contract as a way to give “the district financial certainty, which allows for the research and planning necessary to address workload and planning time.” It said it is pursuing studies on collaboration and planning time, enrollment projections for the next five to ten years, and building capacity and facilities needs, and intends to have recommendations on next steps for those issues “no later than June 2020.”

“The work of Shawnee Mission teachers is deeply valued by the Board of Education and administration,” Superintendent Mike Fulton said in the release. “We are doing our best to move quickly to address issues of workload and class size in ways that honor these dedicated professionals, while keeping the district on a solid fiscal path.”

The district says the offer, which includes step-and-column movement along the salary schedule each year, allocates 79% of the new money the district received from the state’s updated K-12 funding formula to teacher pay. However, even with the 1% base salary increase, many teachers who don’t receive pay increases from step-and-column movement will be taking home less this year than they did last year due to increased healthcare costs.

‘You should have the chance to bargain again next year’

Teachers in the room Thursday continued to voice the belief that many educators will now look for jobs in other districts after this school year, where they could receive similar pay but have lower workloads. Sieck on Tuesday had warned of a possible “mass exodus” as a result of the district’s move to pursue a three-year unilateral deal.

Those concerns were echoed by Rep. Brett Parker, a former member of the Olathe NEA’s bargaining team whose House district includes a small portion of the Shawnee Mission area. On Twitter, Parker said he was disappointed that teachers won’t have a chance to come back to the bargaining table next year, and worried many Shawnee Mission educators would leave: 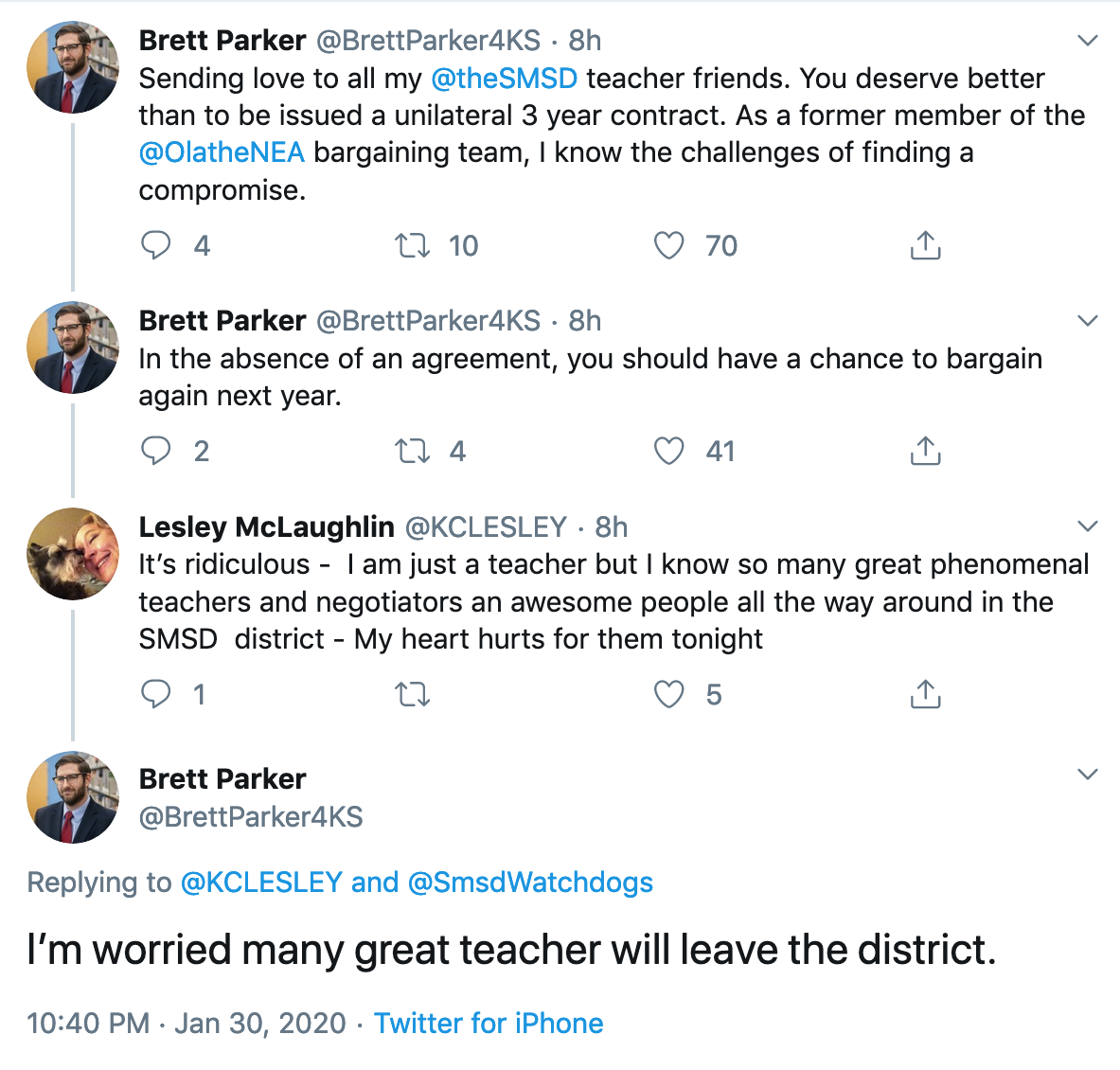