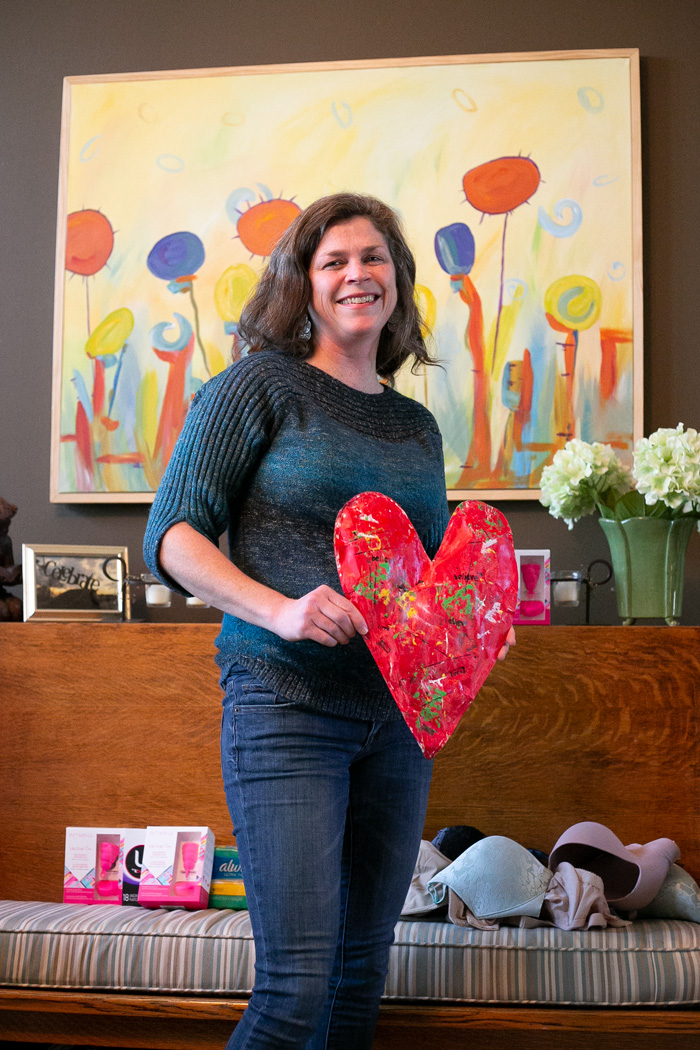 Lindsay Weiss believes in giving back to her community and helping out where she can. Most of her professional career has been in social work, including family mediation, crisis intervention, and substance use prevention in youth. A career wasn’t enough, so she started her own affiliate of I Support the Girls, a nationwide nonprofit that collects new and gently used bras and underwear as well as menstrual hygiene items. She earned her bachelor’s degree in psychology from Ottawa University. When she’s not busy with family, career or volunteering, she finds herself mountain biking, writing, taking photographs, traveling or keeping up with her book club and tennis club friends. She lives in Overland Park with her husband, Matt Weiss, and their two children and two dogs.

I was feeling really sad about the state of how we treat women and girls and minorities in particular. So I decided to do a three week drive just with my family and friends on Facebook. I was going to collect bras and menstrual hygiene items.

All of a sudden I got a couple checks from several aunts and then one of my uncles and then some good friends. I was a softball coach and so some of my softball girls, their parents that I’ve become friends with have given. The effort of the community coming together within my family and friends just really moved me. And so I ended up making a large delivery to three middle schools, two high schools and two shelters. That’s what we ended up getting in that three weeks.

I felt really moved by that and inspired, and so the next year I did it again. And then I think soon after that is when I found out that this was already a thing and they were doing it on a more global level.

I went to a domestic violence shelter and this woman who was working there was so excited. I gave her a bag, probably of a hundred bras, and she said she just spoke with a client that was going to a job interview in a swimsuit because that’s all she had.

She didn’t have a bra or she didn’t have anything else that she felt good and confident in. She didn’t have the money to buy it obviously. And so she was thrilled to give her the ability to choose something that fit and she liked and was quality and that she could just keep.

I just felt like it’s super important and that’s my main driving force, is if you can get people comfortable in their own skin and comfortable with meeting their basic needs, then their abilities to perform and to feel good and to maybe land that job or to have better energy with their kids or whatever that looks like, I want to try and help give them. That’s what the whole purpose behind this is.

I worked with these students from St. Joe, their master project was about menstrual equity within their community. They wanted to donate to the Noyes Home, the children’s home there that’s been around for a very long time, and they wanted to be able to donate sports bras and pads and tampons there, and so they didn’t know where to start. We started talking and these students, we met at a coffee shop, and every single one of us had a story of knowing the importance of this.

One of the women said she was working at a camp with all these kiddos in the middle school age and one of the girls had started her period and didn’t know what to do. She had bled through her clothes and she needed help, so this camp counselor, I believe on her very low salary, went and bought her some supplies to take home, which made such a difference to her ‘cause she was going home to a single dad and she already felt embarrassed. I think we all, whether it’s an uncle or a grandparent or a mom or someone that’s just not comfortable with it, there’s some shame there that I feel like is unnecessary. It’s completely natural and something that needs to be supported.

I grew up in Overland Park and I have always had my basic needs met and still, being a human, I’ve had instances of being embarrassed or not being prepared. I just feel like these kinds of situations have happened to anybody regardless if you have money or not or are between homes or between jobs.