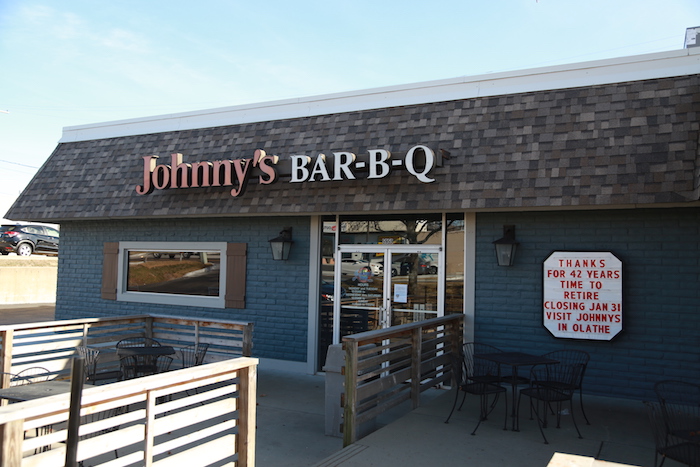 Johnny White fell in love with barbecue as a teenager working at Rosedale Barbeque. As a 14-year-old, he decided early on to begin a career in the barbecue business.

His 42-year journey as a restaurant owner began in 1977 when he opened the first Johnny’s Bar-B-Q in Olathe. A short six years later, in 1983, he closed that location and moved to Mission. Now, he’s shutting down the shop for good on Jan. 31.

“It’s very hard to walk away from, but it’s just time for us, me and my wife,” White said.

Between the hustle and bustle of running a restaurant and his love of barbecue, the one thing White said he will miss above all is his customers. He’s fostered innumerable of friendships with customers over the years just by sparking up a conversation, he said. Not only are he and some of his customers on a first-name basis, he’s catered at his customers’ milestones: weddings, anniversaries, baptisms.

Johnny’s Bar-B-Q is also major part of White’s family. White’s brother-in-law, who worked with him at Rosedale and married White’s sister, has worked with White for 40 years. In addition to his siblings and nieces working at the restaurant, each of White’s four children worked as a busser for their first job.

“Everybody talks about a family restaurant,” White said. “This is a family barbecue, run by a lot of people in the same family, with customers, that a lot of, I consider family.”

The city of Mission has been home to Johnny’s Bar-B-Q for a majority of the 42-year long run, and Mayor Ron Appletoft said in an email to the Shawnee Mission Post that the restaurant has provided the city with a “special gathering place.”

“It is an institution,” Appletoft said. “One of those places that builds community and where families can come again and again. Johnny, his family and staff should be proud of the legacy they are leaving behind. We will miss them and wish them well.”

Although his retirement plans are to spend time traveling with his wife and visiting his grandchildren, White said he’s not done with barbecue just yet — he’s “got some stuff in the fire.” He said he won’t participate in barbecue competitions, but he may dabble in catering or on-site cooking when he’s not golfing or fishing, he said.

“It’ll keep the name going, it’ll pop up, some of it will be around Mission,” White said. “I’m going to try something different. I tell people, ‘Keep an eye out, you never know when I’ll turn up.’”