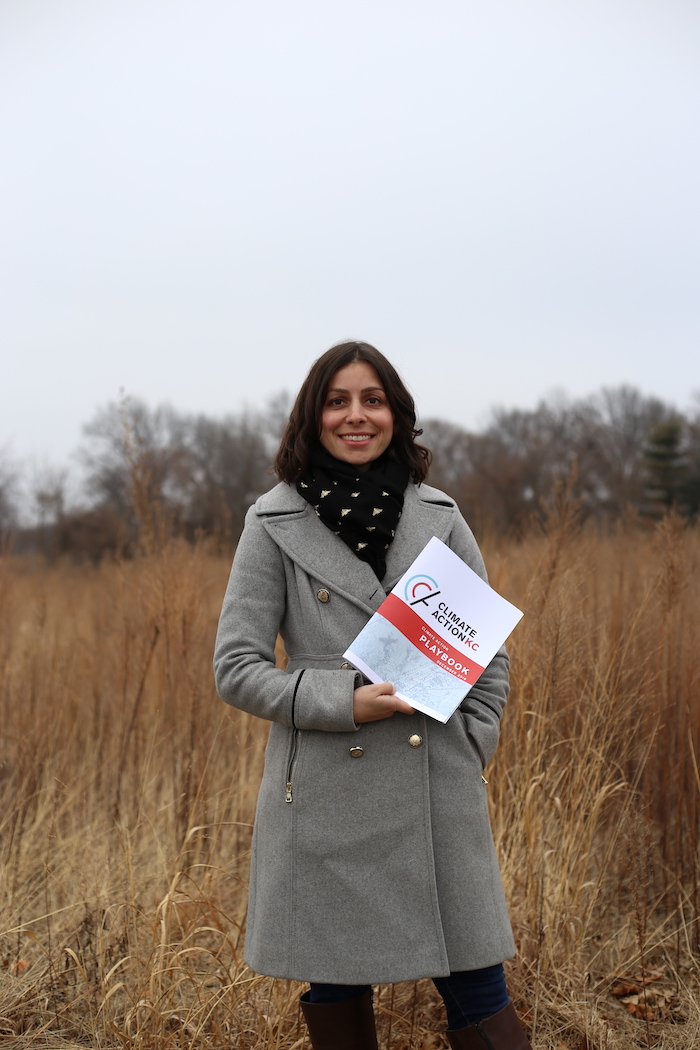 As a mother with young children, Melissa Cheatham feels alarmed about the news from scientists about climate change. So she has invested many hours in helping the Metro KC Climate Action Coalition put together its first Climate Action Playbook. Released Dec. 17, the playbook serves as a guide and set of tools for cities to take action in their own ways to mitigate and reduce the effects of climate change. She studied at George Washington University and previously worked at a national environmental organization, serving as professional staff for the House Energy and Commerce Committee. She lives in Overland Park with her husband, Chris, and their two sons, Stone and Ben, and their new rescue dog, Asha. She considers her civic activism as a hobby.

I’ve been thinking about these issues for my entire professional life and really moving here and having kids, kind of stepped back from a lot of that. But after the 2016 election, I was looking for ways to improve things in my local community since they weren’t going to be improving at the federal level.

And that was when I kind of engaged in a bigger way with local government and local opportunities to make progress. Doing these things make a difference for the climate just empirically by having there be less pollution. But also I think it shows our federal legislators that people care about this, and it’s not just a coastal thing, but that people in the Midwest care about the planet and the future we’re leaving for our kids too.

I think people are seeing impacts already, I mean we’re seeing changing weather patterns, extreme weather events like flooding and extreme heat, what people plant in their gardens or what wildlife they see around them. And certainly, we had a full standing room only crowd when we released the playbook. So that shows me that people here are interested in solutions.

When we released the playbook, the action that we used as the example promotes small and large scale composting. So 24% of the waste is compostable material and when it goes to the landfill, obviously it’s wasteful, but it produces methane, which is a greenhouse gas. And it can also be used instead of fertilizer. So you kind of have a double opportunity to reduce greenhouse gases because fertilizer has greenhouse gas consequences as well.

“Lead by Example” is just changing your own operations. Shawnee Mission School District is an example. They’re not telling anyone else what to do. They’re just composting at their own facilities, and other cities do that too. My kid has seen the “Lead by Example” action because he is learning to compost at school and so are his friends. They’re just seeing that as a way of life.

You could encourage people to compost. “Encourage” has applied to my family because we got a discounted backyard composting bin. I think it was actually through the extension office, but I picked it up at Johnson County government offices.

Then “Enact” would be the final level, which would be some sort of public policy that requires something of the private sector. And that could be requiring trash haulers to collect compost, requiring separation of organic matter, which is what Prairie Village is experimenting with.

No one is saying that this is the plan to solve climate change in Kansas City; that’s coming. But this is steps you can take right now if you’re an elected official, or if you’re a resident, to give to your elected officials to say there are things we can do at the local level.