The Shawnee city council on Monday approved a rezoning for Bellmont Promenade that includes new plans for a smaller multi-family component.

The project, which includes residential and retail developments on 27 acres at the southwest corner of Shawnee Mission Parkway and Maurer Road, will cut the number of apartments nearly in half and allow for an additional commercial pad site. The developer, Legacy Development, intends to earmark this site for a sit-down restaurant.

Additionally, the new plans called for completely separating the residential and commercial components. The project had previously included a mixed use portion of the project — and was partially zoned for it — which meant a rezoning was required.

Here is a look at the new zoning for the project, which will put the apartments in a residential high-rise zoning district: 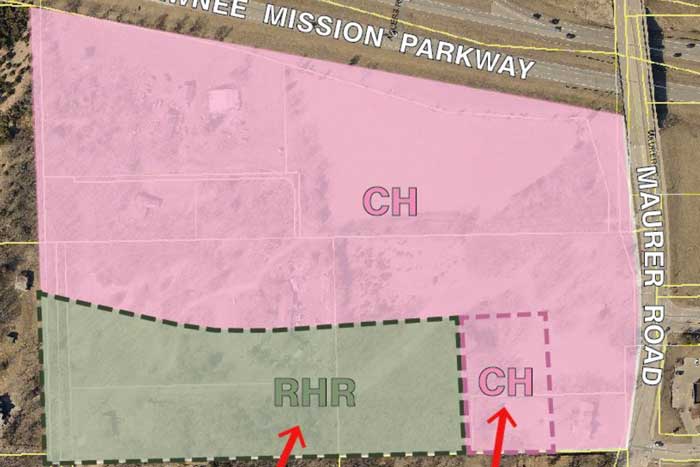 And here is the previous zoning, which had been zoned planned unit development mixed use: 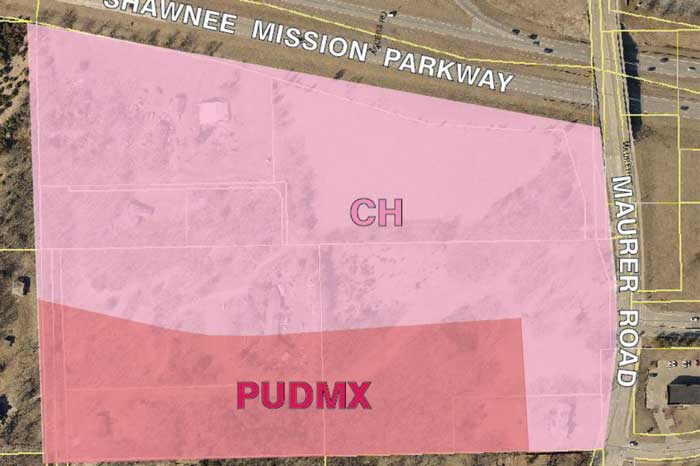 At Monday’s council meeting, Don Lysaught, a resident who has consistently raised concerns and a certain level of opposition to the project, shared his support for the new plans. He and his neighbors had petitioned against the project, citing their frustration with the density and height of the residential component.

Since then, the project developer has found a new multi-family partner to develop the new scaled-down plan for the apartments.

“We would compliment the developer on a scaled-down, more realistic approach, and I would like to think this would be a learning experience for everyone that maybe the first thing that comes down the pike isn’t always the best thing,” Lysaught said, noting the “long process” of project planning for Bellmont Promenade. “I want to frankly compliment the developer. They engaged us early on in this new rezoning request, and we were able to work through and resolve differences, reach compromises, the things that should happen early on.”

Councilmember Eric Jenkins echoed Lysaught’s sentiments, noting his approval that the developer worked with the neighbors to find a “win-win” situation.