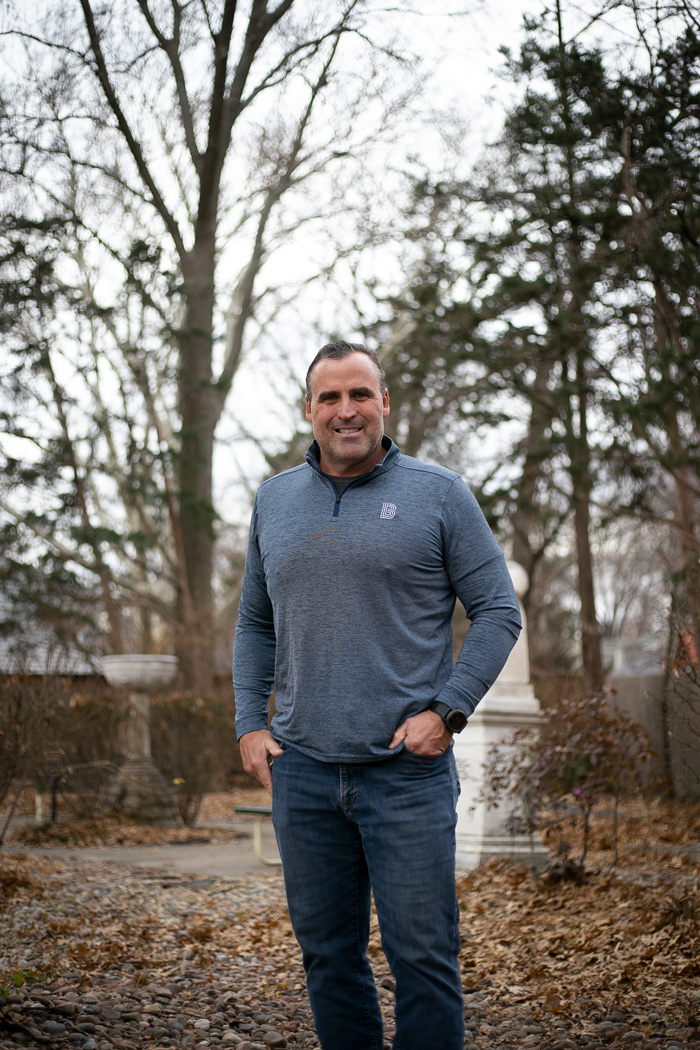 Since leaving the Kansas City Chiefs in 2000, Tim Grunhard has worn lots of shoes. He’s coached in NFL Europe, been head football coach and a theology teacher at Bishop Miege, and coached KU football as well. Meanwhile, he works at 810 WHB sports radio (Crunch Time). He lives in Mission Hills with his wife, Sarah Grunhard. They have four grown children, C.J., Cailey, Colin and Cassie. He is proud of them for their studies, careers and involvement in sports, including football and swimming. In his spare time, he and his wife enjoy traveling and walking around the neighborhood with their two small dogs, Buddy and Sammy. He also plays golf at Indian Hills. Born and raised in Chicago, Grunhard played football most of his life, including for his high school team at St. Laurence and in college. He earned a political science degree from the University of Notre Dame. At the time, he had plans to be a lawyer, but instead he got drafted by the Kansas City Chiefs in 1990. He played 11 seasons as a center for the Chiefs. Our story begins with his first season, right when he hit the rookie wall.

I was lucky enough to have a mentor. Mike Webster was probably the best offensive lineman to ever play in the NFL, especially at the center position. But Mike Webster was about 50 years old when I came into the league, and he was ready to retire and didn’t want to play anymore. So he became a real kind of solid part of my life. So fast forward about the third or fourth game of the year, I tore my ligament in my thumbs.

In the NFL, at about game 9 or 10, you’ve already played as many games as you’ve ever played in the college season, so they call it a rookie wall because all of a sudden you played 12 games already and the season is usually over, and now you still have six games left. So it makes it really hard mentally. So I’m in the game and I’m just really getting beat by this guy I’m playing against. I mean, he’s making all kinds of plays and I’m snapping the ball late and all this stuff.

So, in the middle of a series, Marty Schottenheimer was our head coach, sends Mike Webster out there and Mike Webster comes and taps me on the shoulder and he says, Tim, you need to go back, I’m going to come in for ya. Now, this isn’t like any other sport. You don’t pull an offensive lineman out of the middle of a series. That’s a special circumstance that never really happens.

So I get back and I’m thinking, OK, you know, my father just passed away, I have all these issues going on, I just bought a house, and I’m gonna get cut. I’m gonna get cut. So we go in at halftime and I’m sitting at my locker and I’m pretty distraught. And the guy next to me was Mike Webster and his locker. And all of a sudden I see him and he starts to take his shoes off.

And I think well, he’s probably going to change his socks or maybe get retaped or something. And the next thing you know, he takes his jersey off and his shoulder pads off. And I’m noticing this, and Marty Schottenheimer’s noticing this also. So Marty comes over and says, “Hey Mike, what are you doing?” And he says, I’m not playing anymore. He said, that’s your center. That’s the guy who has to play.

It was like a light bulb kind of flashed in my brain. I was like, you know, Mike Webster stuck up for me. Mike Webster believes in me. It was like in Rocky 2, when Adrian wakes up and he says, what do you want me to do? Win Rocky, and Rocky looked up, and they said, what are we waiting for?

So I went out in the next half of that game and had probably my best half of a season I’ve ever had. At the end of the game, the guy I was playing against, he was like, what was the difference? And I said, Mike Webster stood up for me and said, hey, this is my guy. He goes, man, I wish you would’ve never done that.

He saved my career. I mean, I was teetering on a kind of a change of attitude. I could’ve sunk into the despair of not playing well, but somebody believed in me and stuck up for me and gave me the inspiration when I really needed it