The revised $90.2 million mixed-use redevelopment plan includes an estimated $15.2 million from a tax increment financing, $9.6 million from sales tax on a community improvement district for the project site, and $3 million in sales tax exemption from industrial revenue bonds issued for the project. The original plan was a $113.3 million project with $31.9 million in public funding.

There is no change in the community improvement district, but the developer, MP Westbrooke North LLC, a partnership of Mission Peak Capital and Northpoint Development, is asking for less TIF reimbursement on the scaled-back project.

Mark Pomerenke with Northpoint Development said the revised plan of rehabilitating some existing buildings is more economically feasible than the previous project because it will make lease agreements more affordable for future business tenants.

“This is going to give people an option to come rent in a quality location with 500 residents next door in an established area at a rent they can afford,” Pomerenke said.

The revised project plan has fewer multi-family units (343 units, down from 530) and calls for keeping a portion of the Westbrooke Village Shopping Center (much of it has already been demolished).

The 20-year TIF clock has not reset, so the developers have lost a bit of time capturing TIF from future retail sales. The revised agreement calls for a 1% TIF sales tax and 1.5% CID sales tax. The CID sales tax is to begin Jan. 1, 2021.

Completion deadlines have changed for the new project plan.

A few people spoke on behalf of more than a dozen neighboring residents who have expressed disappointment that the project has changed from what the city had approved in December 2017. They are also disappointed there is no grocery store planned for the space, and they are concerned the developers will not deliver on their promises.

Councilmember Eric Jenkins expressed his frustration that the project has changed too much from the TIF project plan the city approved in December 2017. He also was concerned the project has been delayed.

“We’ve been milling around for two years on this,” he said. “We’re not only not making progress, we’ve gone backwards. We’ve got a different concept here, which is actually a less exciting concept as we started out with.”

The Shawnee city council voted 6-2 to approve the revised project plan and amended TIF agreement, and also approve extend the dates when industrial revenue bonds for the project are required to be issued.

Councilmembers Jenkins and Mike Kemmling voted in dissent. Both councilmembers have historically voted against public finance incentives packages for private development in the city. 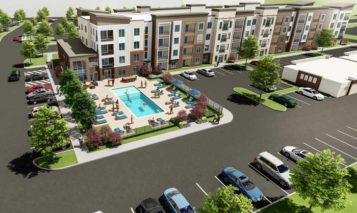