Shawnee Police are investigating after a man with two gunshot wounds was found inside an apartment near 63rd Street and Cottonwood Drive just before 1 p.m. Thursday.

Detective Sergeant William Sanderson confirmed that officers were called to the Prairie Point Apartments and Townhomes after receiving a report of someone being injured.

“Everyone that we have talked to, they don’t think that it happened here,” said Det. Sgt. Sanderson. “We’re not investigating any crime in our city.”

Police have not said where they believe the shooting did occur. Recorded radio traffic indicates the shooting scene is believed to be in Wyandotte County. 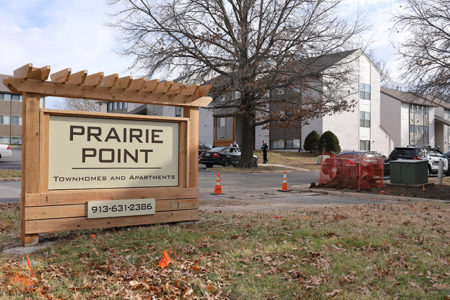 Officers at the scene in Shawnee were photographing and looking at a black Ford Fusion, which had at least three bullet holes on the driver’s side and broken out driver’s window.

Johnson County Med-Act transported the man to an area trauma center with two gunshot wounds to his right calf. He was transported in stable condition.

The apartments are located a block away from the site of a reported pistol whipping earlier this week.