After 13 years in business at Ranch Mart in Leawood, Foo’s Fabulous Cafe will close its doors for good on Christmas Eve.

Owner Jeff Stottle informed patrons of the decision to close the business via a post on the shop’s Facebook page Tuesday. In an interview with the Shawnee Mission Post Tuesday night, Stottle said the decision to cease operations was difficult. As the management of the shopping center prepares for a renovation and expansion, which will be funded in part by a 1% community improvement district sales tax approved by the Leawood city council this spring, they’ve been working to relocate and accommodate tenants in spaces that fit their needs, and that there was concern that the current space was too large for an operation like Foo’s. Stottle said the managers offered him a space in the interior of the shopping center, but he didn’t believe that set up wouldn’t provide enough visibility or parking for a successful relocation.

“We wanted to stay here, and they said that wasn’t an option,” Stottle said. 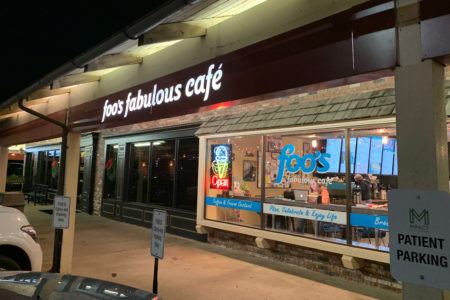 Trip Ross of Cadence Real Estate, which is the developer leading the renovation of the Ranch Mart center, said the company had been trying to find smaller space for Foo’s within the center for five years, but that the parties had not been able to come to terms. He said no lease has currently been signed for the space that Foo’s is currently located in. Ranch Mart is majority owned by banker Bob Regnier.

Over the years, Foo’s has become a gathering place for families and groups in the surrounding neighborhoods. For the past five years, Stottle had hosted a “First Tuesday” art show featuring works by Corinth Elementary students in the back room. Corinth art teacher Kim Bogart said the shows had become an event that kids and parents looked forward to each month. The final show was held last night.

“I’m heartbroken as it has been such a tradition for me and the art program over the last few years,” Bogart said.

Foo’s had also been the site of meet-and-greet sessions for local government officials. Rep. Stephanie Clayton has held monthly Saturday sessions at the shop for years now, where she updated constituents on her work and fielded questions.

“It’s been amazing — I mean all the kids and the community and the parties and celebrations,” Stottle said. “We’ll just miss the people.”

The store will be open regular hours through Tuesday, Dec. 24, when it will close for good at 4 p.m.