Tempers were high at Shawnee City Hall when it became clear the planning commission was going to approve rezoning and a preliminary development plan for a controversial apartment housing project near Johnson Drive and K-7 Highway.

The developer, Austin Homes LLC, plans to build a multi-family and single-family townhome development on about 29 acres in the 5300 blocks of Woodsonia Drive. The plan calls for 42 townhome units in 14 triplex buildings and 384 multi-family units in 16 multi-story buildings.

Neighbors who live near the proposed multi-family housing development on the southwest corner of Woodsonia Drive and Silverheel Street filled the chambers and shared their overwhelming dismay at the project.

Their primary concern: It has too high of a density compared with the nearby single-family neighborhoods.

“It’s been zoned multi-family for many, many years, but there’s never been a plan this dense that’s been proposed,” said Kurt Knappen, a newly elected (though not yet seated) Shawnee councilman representing Ward 3 who also lives near the project area. “You definitely do not have to approve this.”

Knappen suggested the planning commission delay the issue further until the new council (including him) is seated in January.

Other concerns raised by the 20 people who spoke centered around the potential increases in traffic and crime in the area. Several neighbors spoke about traffic jams already occurring in the neighborhoods without the influx of new neighbors driving to and from the proposed development. Others were concerned if the USD 232 school district can handle the influx of new students in the neighboring schools.

In an email to the Shawnee Mission Post, district spokesperson Alvie Cater confirmed that the school district will be able to handle an increase of 60 to 70 students.

Transportation manager Kevin Manning said that the project will have a minimal impact on traffic in the area.

The item has been up for the planning commission’s consideration since July, but the commission has tabled it four times to either accommodate the developers’ schedule or allow them to make changes to the project. Many of the neighbors had raised the same concerns at a neighborhood meeting this summer with the developer.

The project area has been the subject of potential development for more than two decades, as various developers have considered high-density housing projects on the site.

J.C. Nichols Company and later Rodrock Homes had tried developing the site and building anywhere from 330 to 360 dwelling units — in various forms of multi-family apartments, townhomes and/or cottages — but those plans didn’t get traction (in one case in 2002-03, the right-of-way along K-7 Highway and Johnson Drive took precedence over housing plans, effectively canceling the project).

Those previous plans called for 7 to 9 dwelling units per acre. This new plan calls for 14 per acre.

“He (the developer’s representative, Pete Heaven) said that density is subjective, and he’s focusing on the green space that he’ll leave us with,” said Lisa Mische Lawson, a neighbor. “Per the planning commission’s report, I would say that density is not subjective. The current plan (of density) more than doubles our last approved plan, and that is why you’re seeing so many people out here. It’s not subjective. It’s a huge amount of people for a small amount of space.”

City records indicate that Shawnee’s comprehensive plan and future land use map designate the site for a mixture of high- and medium- density residential uses. The surrounding neighborhoods of single-family homes are all designated low-density.

Here are a few renderings of the Woodsonia West Multi-Family housing project: 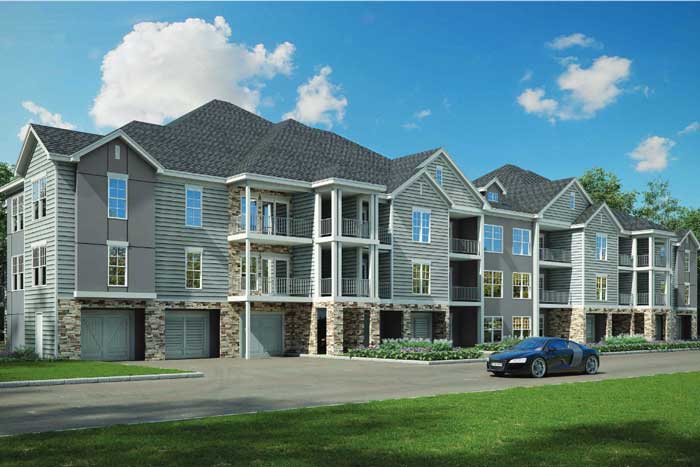 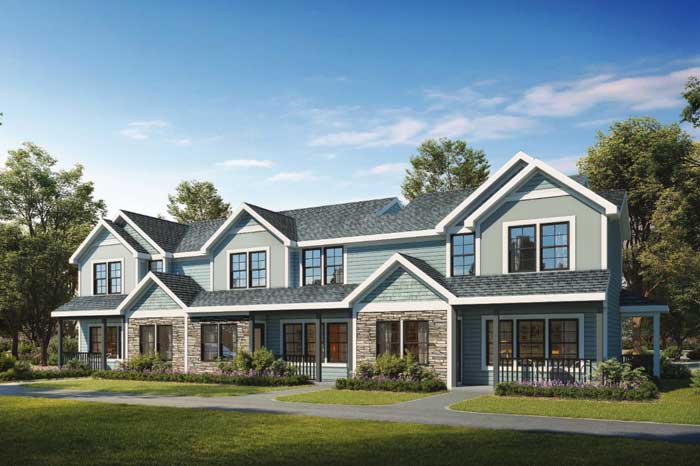 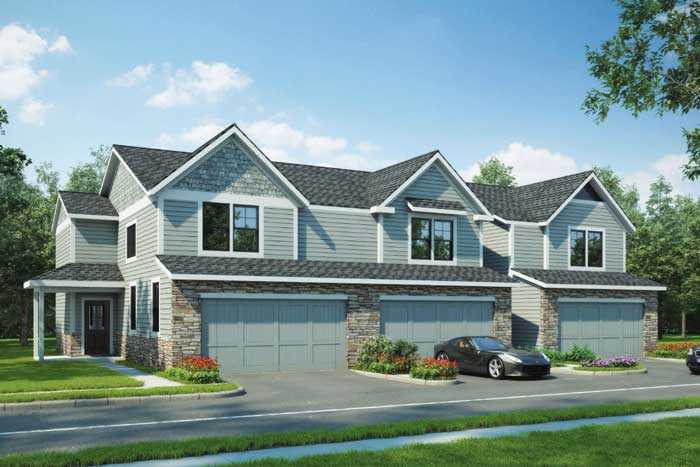 The site was already zoned planned unit development mixed residential, but it still needed to be rezoned as the same zoning district because it’s in connection with the latest preliminary development plan.

The planning commissioners noted their respect for the concerns of the neighbors.

“We have about nine reasons why we can reject this,” said Chairman Dennis Busby, adding that he believes density is less of an issue because people want to downsize into smaller living spaces. He said he thinks the project will be made with good-quality materials and the setbacks from neighboring homes are sufficient.

“Quite frankly, the site plan to me, I understand the density, I understand people would be disappointed, but I don’t have a problem with it,” he said. “To me it’s a good match for this piece of land.”

The planning commission allowed one deviation in the project that allows the townhome driveways to be 11 feet 6 inches shorter than what’s required. Driveway lengths are supposed to be 36 feet 6 inches to allow room for parked vehicles without blocking sidewalks. City staff said the reduction to 25 feet was permissible because there is no sidewalk planned for the side of the street where the townhomes would be located.

The city council will consider the planning commission’s recommendation at a later date.