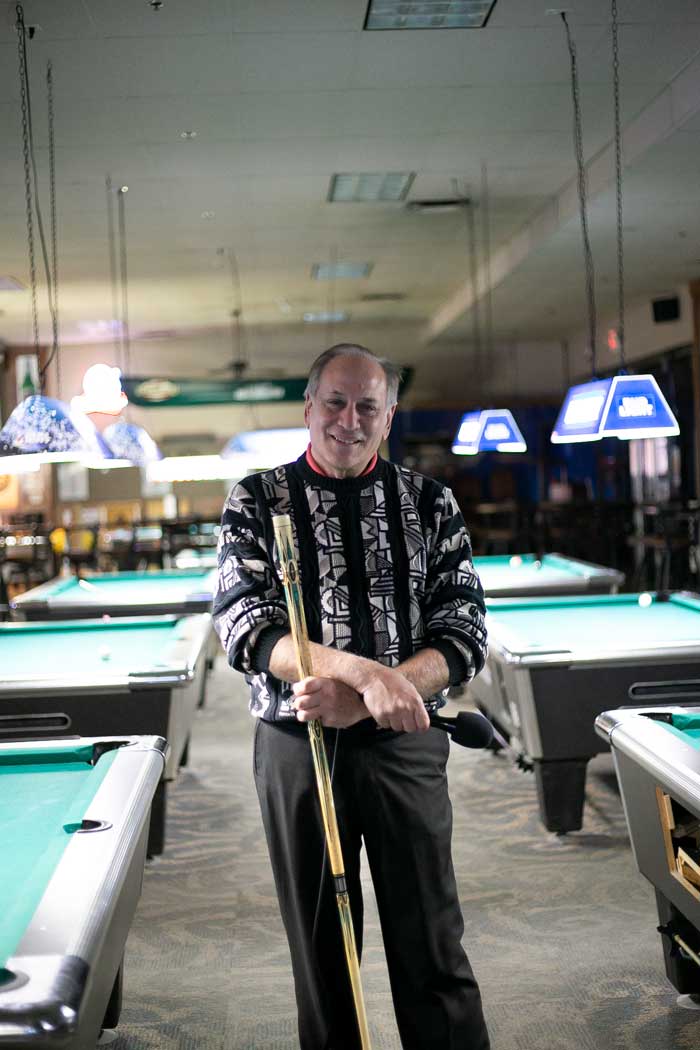 A world champion in trickshot pool (sometimes called pocket billiards) and a baritone jazz singer by trade, Paul Gerni is traveling across the country and around the world, quietly promoting his two passions. He walked into Sharks Restaurant & Billiards in Shawnee, ready for a comfortable evening of playing pool. A few hours later, he would perform a live jazz concert in Kansas City, Missouri. Gerni is growing his singing career, having taken up residency in Las Vegas, where he frequently performs as a lounge singer such classics made famous by Louis Armstrong, Bing Crosby and Frank Sinatra. He lives in Shawnee and has a son and daughter-in-law, Paul and Michelle, in Las Vegas, and a daughter in Leavenworth, Ashley, and three grandchildren. But he’s often busy traveling to singing gigs across the United States. He’s also in the middle of recording a new jazz album. Gerni started playing pool at age 6 at his home church in Indiana and won his first pool tournament at age 7. Since then, he has won the Professional World Championships of Artistic Pool (Trick Shots) 22 consecutive times, the longest championship winning streak in all professional sports. He has also won trick shooting’s International Challenge Cup 15 consecutive times and has been named the World Trick Shot Artists Association’s Player of the Year 11 times. He won 42 of the 50 professional trick shot championships in which he has participated, and has competed and performed trick shots for President Gerald Ford (“he was a cool guy”), the King Carl Gustaf of Sweden and Queen Elizabeth of England. He has given trickshot shows in more than 50 countries, including Denmark, where he is particularly famous for one stupendous shot.

I’ve had so many cool experiences. I remember once I made 21 balls in one shot in Sweden, it was in Stockholm, and then I did it in a town called Sundsvall. I think that was in 1980. I have since incorporated that into my shows everywhere in the world. I’ve done it in Japan, I’ve done it in Greece, I’ve done it in all kinds of places.

Anyway, that was a neat experience, so they heard all about that in Denmark. I went there to help promote a billiard table company there in Denmark, the Soren Sogaard Company.

So when I was in Denmark to do a tour to promote the company, I did 10 shows in about a week, and one of the places, I did a shot where I had the cue ball go eight or nine cushions around the table and stop on a dollar bill. I think it was a 200 krone note, they were still using Danish kroner at the time.

It landed on that note perfectly. The place was packed. They all stood up and were clapping and they did that for five minutes. I’m not kidding. It’s the longest applause I’ve had. And that was for that shot.

It was a really heartwarming kind of applause. But then my tour guide, the guy who was hosting me with that company, he came around, somebody said OK you got anything smaller than that? And he says I have a postage stamp right here. And he brought it out to the table, and I did the same shot on a postage stamp instead of the 200-krone note. It went around the table and perfectly landed on the postage stamp and the place went nuts again. They talked about it for a long time.

But here’s the best part: It might have been four years later, I went back to do another tour of Denmark — Aarhus, Aalborg, Silkeborg, all these other places — by the time we got to this town, Vejle, I thought oh I’ve been here before.

So I did my show and they were all very appreciative, and I said you know, I was here before, were you here before? All kinds of people stood there standing up and clapping, we were here, we remember. So I said back then, I had the ball go nine rails around the table and land on top of a stamp.

They’re clapping, they’re all excited. And I said but the guy who had the stamp isn’t here, so I just wanted to tell you about it, I just wanted to thank everybody for being a part of that night, it was special for me.

And then out of the back of the room goes I’m here: It was the same guy, he came back and he got a job back with the company. And he says and I have the stamp, it was in his wallet for four years. The place is going crazy. They’re loving this. The guy has the very same stamp he kept in his wallet.

I said well, put it down here, let’s go again. And I did the same shot, first time, around the table and landed on top of the stamp. It was a cool story.

If I had to make it simple, the first time I just felt like yeah, I did it. The second time, four years later, I felt like are you kidding me?

The people in Denmark always want me to come back. They have such a great memory from all that. That’s been wonderful. 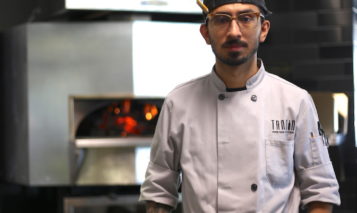