Though overall performance on the ACT has held largely steady across the Shawnee Mission School District for the past two decades, a review of the most recent data reveals that disparities exist in both participation and performance based on ethnicity.

Dan Gruman, the district’s coordinator of assessment and research, provided and overview of ACT data as well as other indicators of student preparedness for college and career at this week’s board of education meeting. Gruman’s analysis of recent ACT data came in the context of the district’s recently approved strategic plan, which calls on the district to ensure that every student master “essential competencies that lead to college and career readiness.”

Gruman noted that Shawnee Mission students generally outperform the national high school population at large on the ACT — but the district has the same achievement gaps by race that persist across the country.

The most recent data from the district on ACT performance finds that the average score among all students was 23.4. White students performed above that with a composite of 24.5. Asian students had an average score of 25. Black and Hispanic students had average composites of 18.4 and 20.1, respectively: 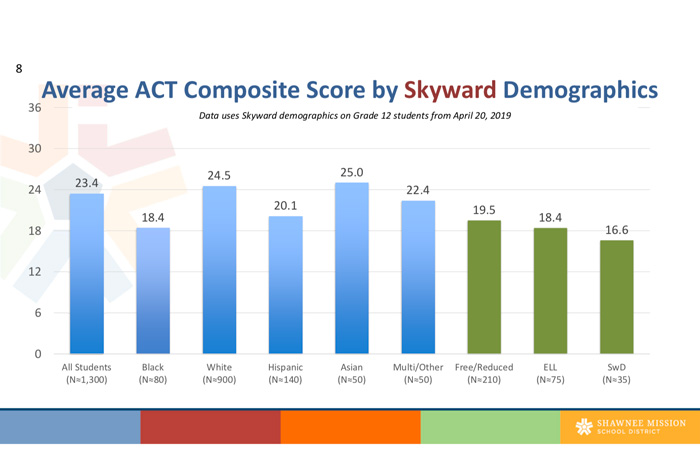 Moreover, participation in the ACT varies by race, with black and Hispanic students participating at lower levels than white and Asian students: 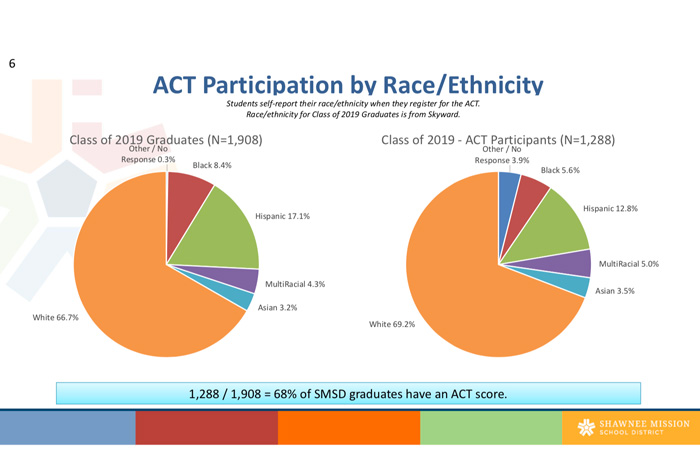 Gruman noted that, as a result of a law approved by the state legislature, all high school students will be able to take the ACT free of charge starting this school year. He said it was likely some of the participation disparities may be addressed by that program.

“We do expect to see a higher participation rate with the free opportunity,” Gruman said. “We have counselors and administrators now going after students encouraging students to participate because it’s free….Some of those barriers are not there.”

Addressing the achievement gap has been among the focal points of Superintendent Mike Fulton since he joined the district last school year.