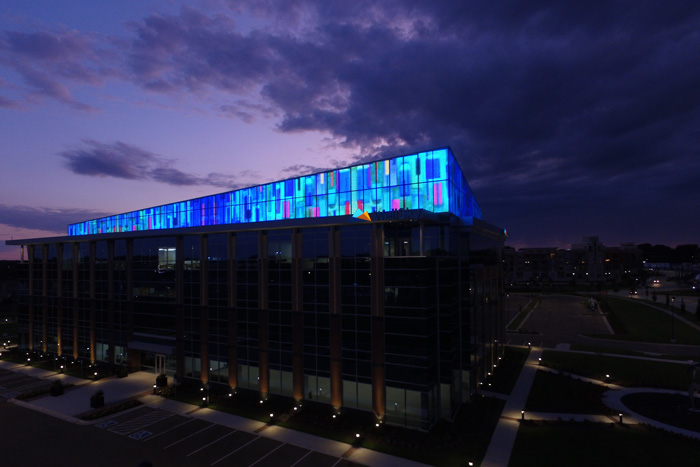 Light panels that will show moving images atop four office buildings at City Place won the approval of the Overland Park Planning Commission Monday, with some commissioners saying the display could become an iconic part of the city’s identity.

The panels, which are incorporated into the buildings’ design, took a step forward in a long approval process with the commission’s 9-1 vote to approve a special use permit. The full city council will have the final say.

City officials have been careful about giving permission for the moving displays because of concerns about what kind of precedent the new technology will set. Historically Overland Park has shied away from anything too glitzy. Neon signs installed after 1986, for example, are heavily restricted and cannot include blinking or motion.

Developer Ken Block and legal counsel Curtis Holland sought to reassure the commission that the rooftops near U.S. Highway 69 and College Boulevard would be tasteful and consistent with the city’s long-range vision.

“This isn’t going to be a Vegas thing. There’s no blinking lights or fast moving lights. It’s not like that,” Holland said. “It’s all going to be done very appropriately.”

Block reminded the commission that a committee of six or seven people with art backgrounds will review what gets put up.

The installations, which would be on only certain sides of each building, would come with plenty of restrictions. No advertising or logos could be used, for instance, and the brightness would be limited as well. In addition the art would be limited to slow and gradual movement, with no strobing or quick jumps. The lights would only be on from just before sunset to just after sunrise.

Block said the panels will make the multi-use development more exciting in the off-work hours, which is something the city has tried to encourage in other development.

Office parks are often dead at night and empty on weekends, Block said. “What we’re trying to do here is create a hundred-percent, all-the-time project where people are there and there’s something going on all the time. From my view that’s what I think has been missing from the City of Overland Park and many other cities,” Block said.

The one person who spoke at the public hearing cautioned against big displays of public art. Mark Lanzrath said the use of a review committee is no guarantee that the art will be acceptable to everyone. “If you’ll remember when they had the downtown murals what kind of controversy came about from that,” he said.

“You’re basically opening up a Pandora’s Box if you allow this. Once it’s allowed you cannot control what is put up there,” he said.

Lanzrath also said the light boards seem like billboards because of their size.

But Block said the rooftop lights differ from billboards because they don’t put out as much light. Light-up billboards are designed to be seen clearly all day so they have a higher light output, he said. The city place lights are a mesh of LEDs, while typical billboards use video screens, he said.

The majority of commissioners were supportive but there were concerns about the size of the displays and the possibility of distracting drivers. And some were concerned about the 10-year permit length as well.

Commissioner Janie Thacker admitted the lights were distracting enough when she drove by that she felt it necessary to pull off the road.

However some other commissioners said the lights would be no more distracting than the large stained glass window at the Church of the Resurrection, or a spectacular sunset.

“I look at it not so much as billboards but as a piece of artwork,” said Commissioner Mike Flanagan. “I feel it’s going to give something to Overland Park that we don’t have.”

Commissioner Kip Strauss agreed. “I’m very excited about this. I think it’s going to be a very iconic piece for Overland Park.”