The developer who built The Boutique Club at Ironhorse, an independent senior living community in Leawood, has a similar project in the works in Lenexa.

Lenexa Land Holdings LLC and Clockwork Architecture + Design are planning to build Boutique Retirement Club at Canyon Farms, a multi-family development for retirees on 11 acres on the northeast corner of Prairie Star Parkway and Ridgeview Road. The proposed project at 18200 Prairie Star Parkway is a three- and four-story split building with “farmhouse” design elements that will feature 139 residential units of one, two and three bedrooms.

The site is in an area of mostly undeveloped land next to Prairie Creek Apartments, a multi-family development, and a single-family subdivision in the works nearby — Cottonwood Canyon, a golf course community next to Canyon Farms Golf Club.

Here’s another rendering of the project: 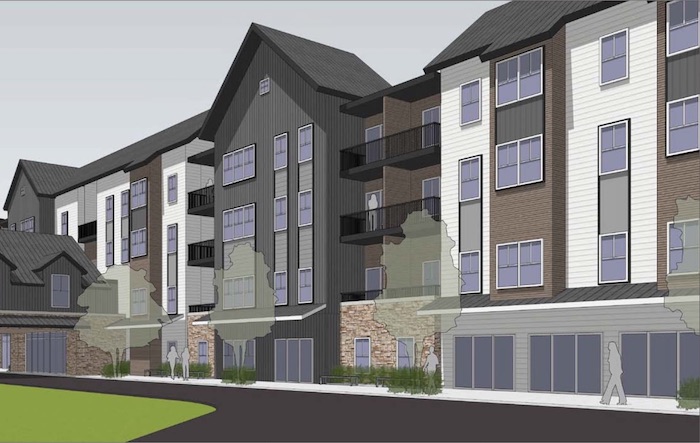 Chris Poss, Lenexa planning commission chair, said that in a public hearing on Monday for rezoning the site from planned neighborhood office to planned high-density residential, some residents gave mostly positive feedback on the project.

One citizen spoke for a few residents in favor of the new housing development, Poss said, adding that it appeared that the developer had involved residents of the neighboring Cottonwood Canyon subdivision in a public engagement process leading up to the meeting.

“The name of the project is still up in the air… but overall it sounds like they did a good job coordinating the talking with one another,” Poss said.

One resident had a question about what the lighting will look like coming off the site at night. Poss said the developer addressed those concerns and plans to use down-facing lighting on the building.

City staff noted that, per this ratio of one vehicle per residential unit, the project will still have adequate parking for residents, guests and employees. There is room for additional parking to be built if necessary, according to city documents.

The development will include amenities geared toward senior residents, such as a salon, restaurant and bar, library and lounge, group activity space and movie screen, and worship space, in addition to standard features like a pool and exercise room, according to city documents. These amenities are for residents and their guests and will not be open to the public.