Despite reservations from some members, the Shawnee planning commission last night agreed that a revised, scaled down plan for Westbrooke Green, a multimillion-dollar mixed-use project on the northeast corner of 75th and Quivira, still generally conforms to the intent of the city’s comprehensive plan.

The planning commission had agreed in November 2017 that the project was consistent with the city’s comprehensive plan. Representatives with MP Westbrooke North LLC, the developer, said they have been working on plans that fit the site; they have found the revised plans would better suit the character of the neighborhood.

Westbrooke Green is one of a handful of projects getting extra scrutiny from city leaders, as the developer has received public incentives in the form of tax increment financing to help fund the development.

Bob Johnson, an attorney from Polsinelli representing the developer on the project, said they are now requesting $14 million in TIF funds for the roughly $90.2 million project.

Doug Allmon, community development director for Shawnee, said the developer “slightly” revised project plans to have fewer apartment units on site, as well as a reconfiguration of the retail components.

Here are the details of the revised project plan on the roughly 32-acre site:

Here is a view of the revised project plan: 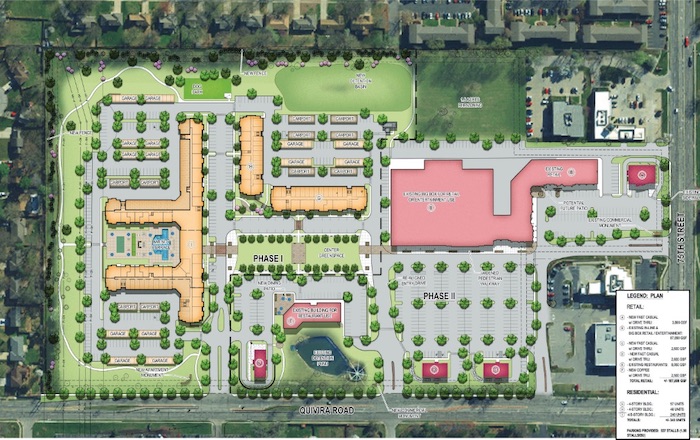 Demolition of several buildings that were part of Westbrooke Village, the derelict and defunct shopping center on the site, was completed over the past few months.

The revised project plan no longer includes some components such as a parking garage and amphitheater, much to the concern of some commissioners.

Commissioner Kathy Peterson said the planning commission in 2017 had approved a project plan with high-rise buildings, a parking garage and an amphitheater. And the new plan appears to have “significantly reduced” the amount of green space, she added.

“This plan in front of me does not look like a destination,” she said. “It looks like a large apartment complex next to a grocery store. This was supposed to be a spectacular new ‘welcome to Shawnee’ on that corner of the city.”

The agenda item did not include a period for public comment, so about half a dozen residents followed the developers and their representative out into the lobby to share some of the same concerns about the project.

The residents told the developer they wanted a destination place with nice restaurants. They added that they did not want to see high-rise “inner city” buildings taller than five stories, nor did they want a project that only has an apartment complex and more fast-food restaurants.

Johnson said the residents would have the opportunity in future meetings to give input on the project plan.

Johnson said they have taken feedback from residents and revised the plans to create a sustainable development.

In the meeting, Allmon said the planning commission will consider approval of a revised project plan, including its various components, before the developer could begin construction.

Johnson said a parking garage no longer made sense for the project size, adding that surface parking would fit better with the surrounding neighborhood of single-family homes.

Johnson said the green space proposed in the central part of the site would have a raised platform for outdoor concerts and events. The residential component — to be built by NorthPoint Development of Riverside, Missouri — has less density to be more respectful of the neighboring single-family homes, Johnson said, adding that a mixture of surface, carport and in-line parking would fit the site better than a parking garage.

Johnson added that the developer is planning to modernize and repurpose the Dillons building to fit the needs of current retail tenants, such as entertainment and fitness businesses. A mixture of brand-new buildings do not fit the market demand, he added.

The project plan does not include a grocery store. Further project plan details will be nailed down and considered for approval multiple times at a later date, Johnson added.

City staff said the planning commission’s decision Monday was simply to agree if the project plan meets the intent of the city’s comprehensive plan. The city’s Land Use Guide of the Comprehensive Plan indicates that mixed-use development — with components of residential, commercial, open space and restaurant uses — is “appropriate for the site,” staff noted in city documents.