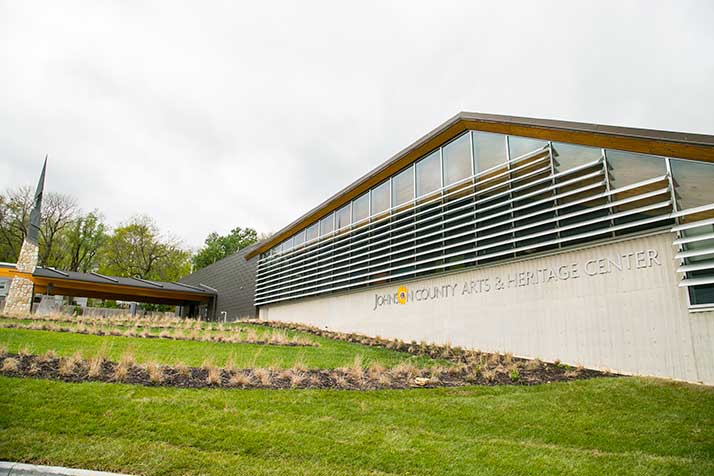 Johnson County facilities management staff as well as staff at the Johnson County Park and Recreation District, who were heavily involved in the redevelopment and repurposing of the building, received the award on behalf of Johnson County at the Urban Land Institute Awards Ceremony earlier this month.

“Really, the parks and recreation and the museum, they breathe life and energy every day into the building through their programs and their exhibits and their theatre productions,” Reinhardt said. “They’re the ones that give it life. And it’s just very pleasing to be a part of overseeing the physical transformation of the building.”

Reinhardt also gave credit to the other organizations that had a part to play in redesigning and repurposing the Arts & Heritage Center, including SFS Architecture, the lead designer on the project, and McCownGordon Construction, which completed the renovation work on the facility.

The Johnson County Arts & Heritage was formerly the King Louie West Lanes and family entertainment center, which included the bowling alley as well as an ice skating rink and billiards area. It closed in 2009.

Reinhardt said the building had been vacant for a few years until Johnson County leaders began looking for a new space to house the Johnson County Museum.

“We ran across this property and thought that it had some potential, certainly being a historic building of a certain type of architecture that was unique for the ‘60s era,” Reinhardt said. “It tied in well with the history element associated with the county’s museum.”

Reinhardt noted that design elements of the Arts & Heritage Center pay tribute to its historical role as a ‘60s era building. And certain components of the original building were incorporated into the design as well.

Where the museum is located, remnants of the ice skating rink are noticeable. The wood-glued laminated beams as part of structural support of the building still stick out along the building facing Metcalf. And the spire and entry areas are still intact, as well as original stones along the east side.

Construction began in 2016 and was completed about a year later. The newly renovated center officially opened in June 2017.