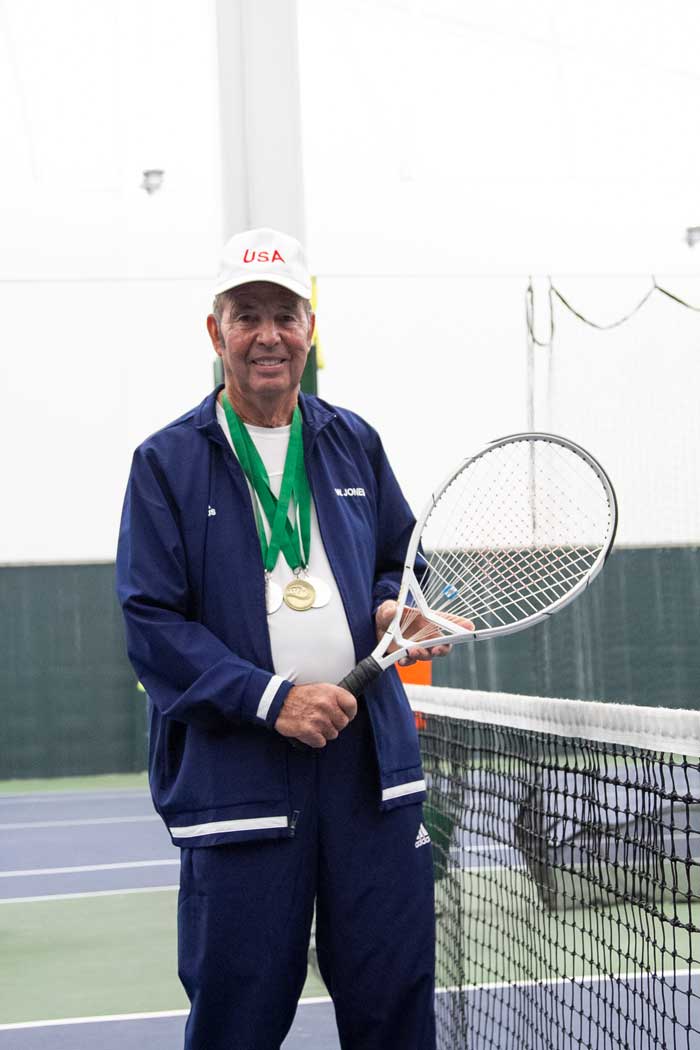 In his age group, 81-year-old Wilbur Jones is basically the second best tennis player in the world. Last month, he won second place in men’s doubles and mixed doubles at the tennis world championships in Croatia. He has already earned 10 gold balls in his sport. He first picked up a tennis racket at age 35 and hasn’t stopped. A former educator from the Shawnee Mission School District, Jones spent 36 years as a teacher and later principal at a few Shawnee Mission schools: Shawnee Grade School (now closed), Ray Marsh Elementary and Merriam Elementary (now closed), before he retired at age 57. Occasionally, he enjoys riding his unicycle. He lives in Shawnee with his wife and fellow educator, Susan Jones, on their 40-acre farm where they used to breed and train Arabian horses for shows. They have four grown children, 20 grandchildren and seven great-grandchildren.

The reason I got so good was I always got into groups better than I was. Everybody likes to win, so when they get somebody new, they like to just run him all over and beat him. And that was me.

So every new group that I would get into — guy standing over there on the other side of the court was one of the first guys that I started playing tennis with. I could probably beat him 0-0. He wouldn’t get a hit. But still a good friend, go to parties with him — I got in his group, he was better than I was, and I got in the next group, they were better than I was.

I didn’t start playing until I was 35, so all my joints, I haven’t gotten any new knees or hips or shoulders, where most of the guys my age have a new hip or a new knee. I can still run and that’s why I’m winning all these (gold balls).

In 2018, I won five gold balls and was number one in singles and number two in doubles. So that qualified me to be selected for the World Cup in Umag, Croatia. I had to apply and then the selection committee put out the four players that are selected. So I found out about it on the internet.

And in our age group there were 17 countries represented and the only match that I lost was to the team that won it, which meant our team came in third because the singles lost and I lost the one match in double.

In the world, I can’t believe it.

I had a goal to win a national tournament and win a gold ball. I did that. Then my next goal was to represent the United States in a World Cup. Did that.

I play national tournaments to see how well I can do at that level. The goal was to try to win a gold ball and then the next goal was to represent the United States.

I think you have to stay active at any age and eat properly and don’t smoke and don’t drink. I’ve never had a beer in my life. I have had some wine at different times to celebrate.

I try to eat properly and get enough sleep and stay active, and living on the farm, I am very active. I bale my own hay and train my own horses that I had, but I think the main thing is to stay active and have goals, stay in good shape.

Eating properly is important, but that’s where I probably fail. I eat terrible. I ate biscuits and gravy, mashed potatoes and gravy but my metabolism is so fast that I could eat a ton and I don’t gain any weight or I could eat nothing and don’t lose.

It’s a high to win. I think winning gives you a high and the anticipation gives you a high. You play against top players at the national level, so you know that every match is going to be tough. And so you have to be mentally prepared to play each match.

Next year it’s going to be in Spain. I’m working towards that. That’s why I’m going to Virginia Beach, to play in another national tournament.